The War of the League of Augsburg

I started building my armies for the wars of Louis XIV in 2001-2004. I focused on the War of the League of Augsburg, with a nod to the eras that preceded it. At that time, there was little popular interest in the era, and material was hard to come by. Therefore, I wound up creating my own rules variant (using Volley and Bayonet) as a necessity in order to game the era. To help others who might wish to get started in the era, I shared my information by running games at the major US HMGS East conventions (participation games), posting resources in the Volley and Bayonet Yahoo Group and in my own stand-alone Yahoo Group, and with Keith McNelly's excellent Volley and Bayonet web page. I also submitted an article to the old MWAN magazine with the kind of overview to the era that I wish had been available when I had begun (article is available below). Since then, the era has become much more popular and resources more available.

But enough of that. I have migrated my resources to this page. You will find my article, my rules variant (and supporting documents), a set of counters of ready to play armies (long before Blucher), scenarios, and a few other things. Scroll down and see what interests you. Leave a note if you pull anything off the page or have any questions--or just wish to say you visited.

Forget What You Don't Know About the Nine Years War 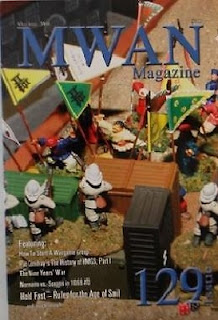 These rules are an extension of the first edition of Volley and Bayonet--plus: with the "official" errata that was available at the time along with other updates and adjustments that I gathered from the VnB Yahoo Group and other places.  Although possession of Volley and Bayonet (VnB) would be helpful, perhaps even necessary, to understanding the rules, they are a significant departure from VnB in many ways.  So anyone familiar with VnB needs to pay close attention to the departures, which should stand out. To help with play, I produced some player cards with summaries of the special rules. I give a set of these to all players (and the Army Commander has a special one for his use concerning things that only pertain to that level).   I've also produced quick reference sheets for the variant(s).  Looking over the ready-to-play armies may give you a sense of the system since it reflects the structure of the variant, even if you don't intend to use them.

Read on and grab what you like and feel free to ask any questions.
DOWNLOADS
VOLLEY AND BAYONET VARIANT RULES

LEAGUE OF AUGSBURG PLAYER REFERENCE SHEET
(Reads like a flow chart. Start with the yellow boxes and flow to boxes that they overlap)

DUTCH WAR PLAYER REFERENCE SHEET
(use with the Battle of Seneffe, The Great Conde's Last Battle, 1674)

I created a complete set of counters to replicate my LOA armies in order to help me with playtests.  A sample of the foot and horse are below.  See the downloads  below the samples for more.

A collection of my convention participation games. Everything you need to run them is in a single download at the link (in a compressed file that has multiple folders and files within).


IMPORTANT NOTES ON THE STRUCTURE OF THE SCENARIOS

1)   I research a battle and  make a game out of it.  I do adhere to history, but I also tinker with the product in order to create a viable gaming experience.  Thus far, nobody has complained about the historical games not being "accurate" in this way.

2)   I don't do a mathematical translation of men, horses, and guns into Volley and Bayonet strength points. Instead, I take the approach that everything is relative. Thus, you will see that there is an "average" size for infantry and cavalry and then there are some larger and smaller units. For those familiar with Volley and Bayonet, you might also notice that the strength might points run high (by about 1 per unit) for the linear scale sometimes, and that the exhaustion levels may look a point too high  as well. I do this deliberately to give the game more "fight".   I also have retained the original VnB rules that make small units more durable, like the "last SP rule" that says a unit in this  era can't be wiped out only by fire (as well as some other tweaks of my own, like changing the effects of being out of control). This has worked out very well for convention/participation games.

2) My collection has fixed unit designations and morale grades (see the downloadable armies above). Therefore, the unit designations in these scenarios conforms to my unit list. If possible, it will also conform to the historical units, but not necessarily so (especially with the horse brigades). Keep in mind that Volley and Bayonet units often represent multiple battalions, squadrons, or regiments. Thus, the naming conventions are often either generic or have a single designation representing multiple sub-elements (as mine d0).  Having said this, there are cases where the unit designation will represent a single, muti-battalion regiments (depends on the Army, etc).  You may see colors associated with the commands in some of the scenarios. That has to do with a color coding system I use with my figures and isn't necessary for the games. If you look at the image of the Walcourt game at the top of this page, you'll see the color coding at work on the back side of the units (the discs are magnetic strength point markers that are color coded by division).
A NOTE ABOUT DOWNLOADING

When selecting the link, the folder should pop up in another window (which is the interface for Google Docs). You will see the "download" icon in the upper right hand corner (a downward pointing arrow). Choose that, and the folder and contents will download to your computer. Then navigate to it. Extract it (a right click on the folder should bring up an "extract all" option). Open it. And You're off!

WALCOURT, 1689, THE OPENING BATTLE OF THE NINE YEARS WAR

On 25 August, 1689, Marshall Waldeck and the Army of the Grand Alliance enjoyed one of its few successes of the Nine Year's War at Walcourt. Here, the fledgling Williamite English contingent would undergo its continental baptism of fire under a newly minted LTG Churchill (later to be known as Marlborough) in his only engagement of the war. Commanding the Sun King's army was the unfortunate Marshall Humieres, who would be nicknamed "Sans Lumiere" for his handling of the battle.  He would be replaced by the crafty Marshall Luxembourg, who would go on to a string of victories (but those are for other games!).

This is a game of the seasaw battle of Steenkerke, August 1692: William III launched a surprise attack on Luxembourg's French army encamped near the village of Steenkerke on the Senne River. Driving all before them, the picked regiments of William's advance guard were finally checked by the counterattack of the French Guards and Gendarmes. With French reinforcements arriving, the surprise attack turned into a fighting withdrawal. Combat would go on until midnight, and both sides would claim victory.

In June of 1692, William III marched south to break the Sun King's siege of Namur. Marshall Luxembourg marched north with his 60,000 man Army of Observation to block him. Heavy rainfall and swollen rivers kept the two armies from colliding in what would have been the largest open battle of the Nine Year's War. This game clears the skies and allows that pitched battle to happen.


WATERLOO, 1692 (HYPOTHETICAL)
This is a topsy-turvy version of Waterloo, fought between William III and Marshall Luxemburg 123 years before Wellington and Napoleon clashed there. In the summer of 1692, French forces marched north from Namur and Charleroi to threaten Brussels (sound familiar?) in order cover the Sun King's consolidation of defenses at the recently captured fortress of Namur. Historically, this brought on the confused battle of Steenkerke. In this scenario, the armies instead meet in a grand set-piece battle at a place just south of Brussels...

On 11 August 1674, the 23 year old William (Stadholder of the Netherlands) marched the coalition army down the Royal Road from Brussels to Mons to invade France. Guarding the frontier was a smaller French Army under the Great Conde, hero of Rocroi (1643). True to his aggressive nature, Conde decamped his safely entrenched army and intercepted, leading to one of the greatest pitched battles of the 17th Century. NOTE: THIS GAME USES THE DUTCH WARS REFERENCE SHEET