Before there were blogs there were Yahoo Groups. These games began there, and I now offer them here. All I ask in return is that you post a note to say that you downloaded one (or more), some feedback on your experience playing them, and that you attribute the source should you use anything therein (all material © Ed Mueller). Feel free to post or ask questions as well. Enjoy!

The Numbered Links in the below are zipped folders. When selecting, the folder should pop up in another window (which is the interface for Google Docs). You will see a "download" icon in the upper right hand corner (a downward pointing arrow). Choose that and the complete folder with sub folders and other contents will download to your computer in one step. Then navigate to it. Extract it (a right click on the folder should bring up an "extract all" option). Open it. And You're off! Drop a line if there are any questions. 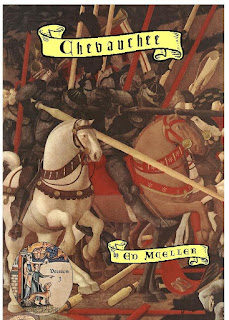 Chevauchee (translated: “War Ride”) is a simple card-based medieval battle game for 2 players.This game is not intended to be a rigorous historical representation, but more of a fun and quick game that gives the flavor of medieval warfare.

CHEVAUCHEE DOWNLOADS:
Review by Nick Harbaud in Slingshot #244, The Journal of the Society of Anicents, Copyright 2005 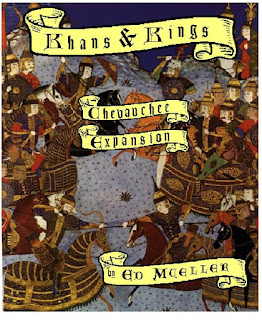 Khans and Kings (K&K) is the first expansion to Chevauchee, and requires the original Chevauchee to play. K&K adds an “Eastern” series of decks, along with a modified “Western” opponent. The Eastern forces are representative of Steppe Warrior armies, most closely modeling Mongols, but also representative of their inheritors (Golden Horde, Blue Horde, White Horde, Timurids, Tartars, Cumans, etc). 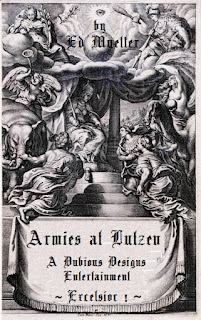 The first of my designs, this game was inspired in part by Columbia's Dixie and Eagles systems. Armies at Lutzen (AAL) aims to represent army command in the Thirty Years War using a battleboard divided into areas and cards for units. AAL does not present the actual Battle of Lutzen (1632), but is based on the armies involved in that campaign. .