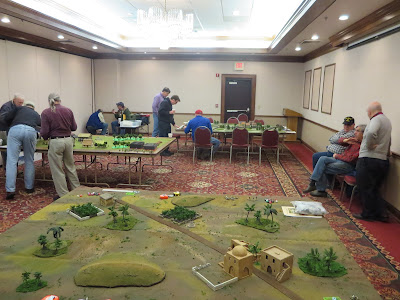 It's been awhile since I've posted: out of town on some business travel, a few late-season snowstorms, and a few other things have intervened. I'm happy to break the drought with a report on our club's March Game Night.  As is the norm (among our abnormals) there were three games on offer:  A WWII Iron Cross Game, An Indian Mutiny Brother Against Brother, and a Medieval Have Fun Storming the Castle, Lads game.  I played in the last, a GIF animated story of which is at the bottom of this post.  As usual, you may clix pix for BIG PIX.  There is also an excellent report on AJ's Wargaming Blog

On The Road to Lucknow: Indian Mutiny 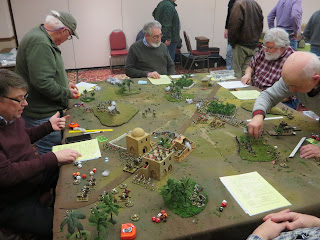 Byron, at the head of the table, presides over his Indian Mutiny Game. 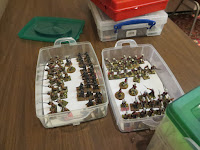 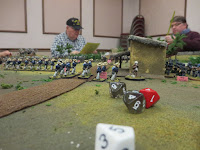 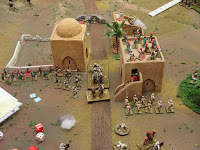 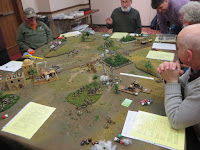 Byron is quite accomplished at running Brother Against Brother Indian Mutiny games, and he'll be bringing this game to the Historicon Convention in July. 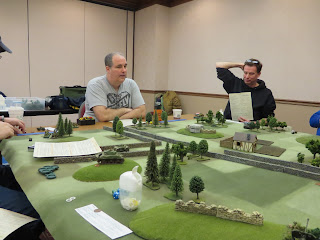 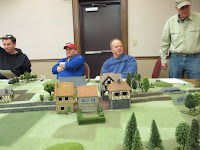 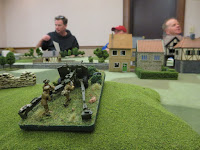 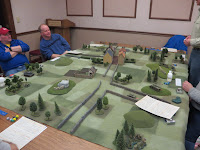 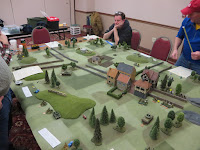 Iron Cross has captured the attention of our group to the extent that it will be featured as the rules for our upcoming October Game Day (an annual large game that our group runs on a Saturday).  Several members of the club are running a series of Iron Cross games leading up to that event to get the club oriented.


Many Rivers To Cross: Okay Just One: Medieval--Franks vs Saracens 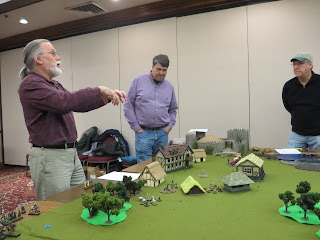 Michael B explaining his Have Fun Storming the Castles, Lads, home-brew system to players before the game. 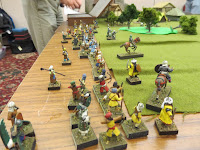 This was the game I played in. Here is the description: A Saracen force attacks a crusader castle that guards a river crossing. They are too small a force to storm the castle, so the Saracens seek to burn the village that has sprung up in its shadow and to capture or kill the peasant workers and to take home the livestock before they can take shelter or flee across the river.

I was among three Saracen players, and we were pitted against four Franks.  It was something of a blur.  I was in the center, so I basically took my two units (one of foot and one of horse) and charged down the middle of the table to cause as much havoc as possible and get as far as I could while my compatriots worked their way down the flanks.   In short, I ran the gauntlet.  The following panels give you an idea of how my mission came to be called the "Martyr's Charge"--I'll leave it to the end of this report to let you know whether or not we heroic defenders of the Holy Land prevailed over the Frankish interlopers.

The Franks Coordinating Their Move

My Main Striking Force strikes fear in the Franks. I had inadvertantly grabbed a leader figure (the fellow in blue) from a neighboring Saracen player (John) and used it along with my men-at-arms for most of the game. It took awhile to notice (as you'll see in this story).

The Franks, in an act of desperation, move a line of foot in front of their crossbows...

...which the Saracens made them pay for, but with bowfire. In the next phase, the Saracen horse followed up with its charge, but the Franks had the countermove and so were able to slink out of contact. In the background can be seen fellow Saracen player Paul.

The Martyr's Charge hits home--sort of. This wound up being near the end of the game. The footare fellow Saracen John's, who had by then worked his way around on the right. Shortly after this, he would reclaim his leader figure (who survived the solo charge into the crossbows).

In the end, although a ferry full of peasants and livestock were gotten across the river, we had grabbed enough livestock, picked off enough peasants, and (most of all) caused enough destruction by putting the church to the torch to be declared victors over the Franks (although this was one of those victories that sure felt like a beating!). 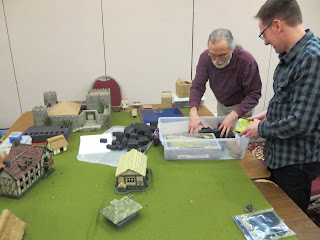 Putting away the toys after the game

That concludes my report on our March Game Night, dear readers. In sum,  it was another fine thing, to gather with friends and push toy soldiers at the end of the week.