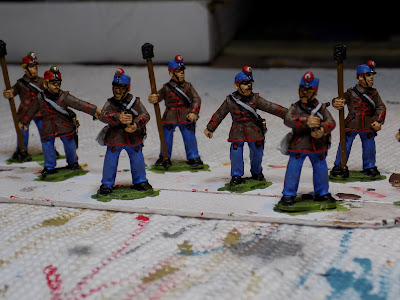 Hungarian Gunners, waiting for the last steps
Harken back with me, dear readers, to my earlier post of 28 January ,when I first reported on my latest conversion project, the Hungarian/Honved artillery, estimating that it would be the work of a week--fond, silly, man!  Well, here I am, nearly one month later, and I can report that...well, if they aren't done, they are nearly done.  As usual, you may clix pix for Big Pix. 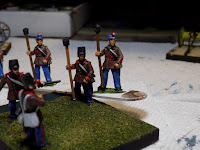 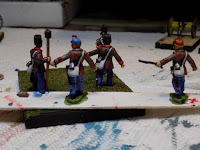 By way of comparison to the source figures, in the above you can see the converted Hungarians next their counterpart Austrians  (all Northstar 1866 Austrian Artillery Figs). Headgear modification aside, the major work involved free-handing the Hungarian loops and knots and such.  To make the red stand out against the brown, I found that I needed to once again resort to black lining--my method, if anyone wishes to replicate it, was to first paint in the details in black, a bit larger than I estimated them to be, and then do the red over the black. 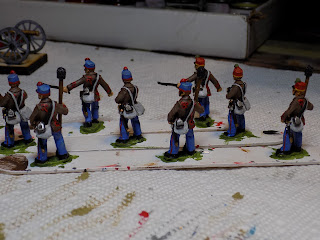 Above, "Red Cap"artillerists next to their blue-kepied comrades. Still to go is a coat of flat varnish, which I shan't be able to do until tomorrow--a word to those who may wish to try enamels.  You need to let them season for at least 24 hours before taking that varnish step. Otherwise the flat varnish will take the paint up in places and in others will make it run  (I learned this the hard way: once and once only!).   After the varnish, there will be a bit more cleaning up of stray marks and such, and then comes the mounting.  I'm looking forward to seeing the Hungarian candy-striped guns and these figures together on the same stand--I doubt that anyone will be mistaking them for their Austrian cousins! Barring another back problem (which did keep me out of action for at least ten days), I should be posting the finished product in a few days (fingers crossed!).

THE GAME THAT NEVER WAS: AN UN-BATTLE REPORT 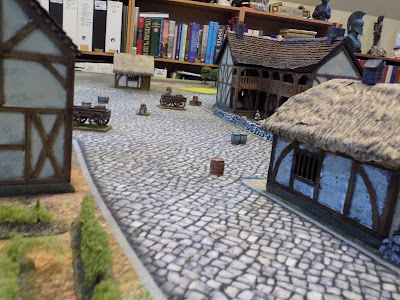 Figure-eye level view of the the scene of the non-action: you can spy the lone Quartermaster in the yard in front of the Inn.
This last Friday was my club's February game night, and I had spent a good part of the last weekend plus the balance of my free time up until Wed of this week (more on that in a moment) putting together a 17th Century skirmish-level game using a modified version of Dropwing Games System's Reiver rules  (by Steve Winter).   This was going to be my first use of a Cigar Box Battle Mat This will also most likely be the game that I will be running at Huzzah! in May. 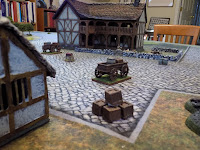 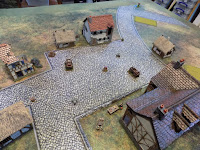 The premise for this bit of "small war" was that things had gone badly for one side in a battle, leading to the usual the panic in the baggage area. The baggage detachment bolts, taking every bit of transport with it, leaving the unfortunate quartermaster stranded, along with two guards who were too slow to get away with the rest (only the quartermaster is in these pictures). 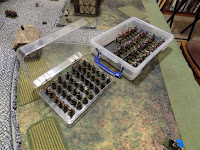 Enter the players, each in charge of a file of dragoons or Croats, converging on said baggage camp to grab whatever they can--each player for himself.  This is the old "and then they abandoned the battle and looted the baggage camp" moment, a speciality of dragoons an Croats.  Among the barrels, boxes, and buildings, there will be stashes of stuff to be had. Being a very low level system, each player would run 6 figures, which would have a basic set of stats each (nothing very elaborate). Above, I had even gotten so far as to sort the figures for movement (each figure represented in mounted and unmounted mode). 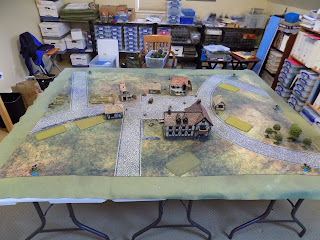 Unfortunately, on Wednesday night, a shovel full of water-soaked snow got me--and I strained my lower back.  All work ceased on the game and instead I proceeded to indulge in some nice back spasms.  Given some nice muscle relaxers and doing a bunch of nothing (horizontally), I should be returning to normal operations in the next week (but never in time for the Friday game).   So, I'll be putting the finishing touches on the scenario and bringing it to the April club game night instead.  I'll be adding a few more trees and such for the actual game, but it doesn't need much more.  Thus ends my un-battle report, dear readers, until April.

Following up from the previous work in progress, this last week, and the bulk of this weekend, was expended on assembling and painting up the hardware (ie guns) for my Hungarian artillery. I decided to do all the models I had on hand, which is more than I need.  I thought that I would just tuck in and get them all done with an eye towards having them out of the way should I ever need to expand my collection (we all know that never happens...).   By keeping two of them in Imperial yellow, these could also work for my Austrian contingent as well.  As far as the grindingly slow progress, let's just say that my aversion to painting equipment was not ameliorated by the experience of getting these together. 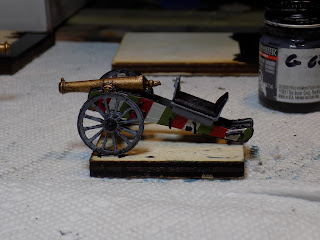 Any geometric pattern is a challenge given how the eye picks up on irregularities.  I wound up tracing the diagonals in pencil and then painting between the lines in order to get these to come out right--not a deliberate process that I came up with in advance but rather a solution that grew out of trial and error.  There is still a bit of touching up to do, but this is where these stand at this point--the grey is my take on what the "plain wood" of the Hungarian carriages (those that weren't Imperial yellow) would look like once weathered. Once these are plopped on proper stands with some green underneath, I'm hoping that the Hungarian colors will stand out a bit more. 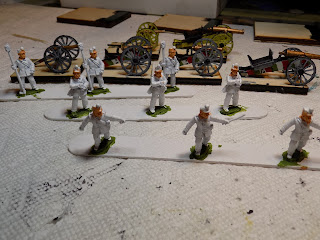 I had thought that I would have been able to knock out the entire project by now, but as you can see, the gunners are only just begun.  So, dear readers, work continues.