A DIVERSION: AN TREATISE ON WARRE

In this post, dear readers, I meander into the atmospheric whatnots that I have inflicted on players at my games. Specifically, a version of a 17th Century "Treatise" that I would hand out at the start of my League of Augsburg games to put players in the correct frame of mind. I have several versions of these. The one in this posting is a fairly generic set of maxims for all miniatures games. Other versions are game specific, with advice on how to gain victory points sprinkled in among the maxims. Here are a few examples of  in-game advantages written as maxims (for taking artillery, seizing camps, and exhausting divisions):

Ordnance is chief among the prizes of warre. Safeguard thine, therefore, as a miser doth a newfound copper, and seize the enemy's gonnes to vex him mightily.

Menace the enemy's followers and therebye wreake alarum among his soldiers for the safety of their goodes, courtesans, and sundry chattels.

Eache grande division overthrown is like an weapon struck from Leviathan's hand, and advantage shall accrue in equal measure to the level of confusion wrought therein.


Truth be told, I found that players at conventions, given everything else they were trying to assimilate, did not invest much time in these (quite understandable).  They would often overlook the treatise entirely among the charts and OOBs that they were working with, and I would wind up having to bring it their attention.  Often, I would then find myself highlighting the maxims that "counted" in order to set the framework for the game: hardly what I was thinking when I came up them. I came to the ultimate realization that these were more for my amusement than the players, and were on the borderline of being more distraction than enhancement.  As a result, I now use them more sparingly, more so in club situations where players are familiar with game systems and not trying to take too much in.


I offer the following general treatise on miniature gaming below as a amusement, if nothing else, for my blog readers.  I used one very much like it as a set of guidelines for my basement gaming group when I lived in Maryland.  It worked well enough in that role. Your mileage may vary, if not as a tool, then as a diversion.  As usual, you may Clix Pix for Big Pix: 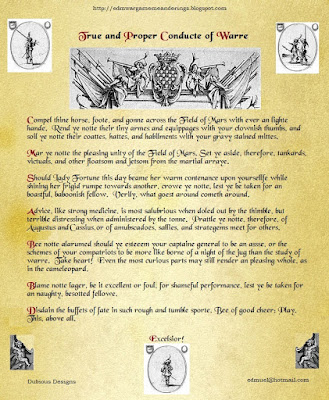 There is also a  pdf version available  that might be easier to read. 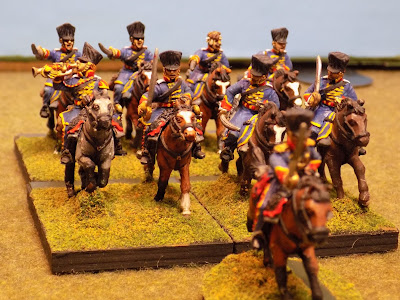 In this post, dear readers, we meander into my Napoleonic collection--specifically, the Prussian army of the Befreiungskriege (1813-1814/15). Once again, I'll be telling the tale of another conversion (what a surprise, eh?).

One of the issues with the Prussian army of this timeframe, superficially, is that the only options for light cavalry seem to be Landwehr (plentiful) and hussars (high-octane). There is no middle ground, garden variety light cavalry option...unless, of course, you recognize that there were four regiments of "National" Cavalry that were raised and equipped by the Prussian states (The Ost Prussian, Pomeranian, Silesian, and Elbe, National Cavalry Regiments). Although not hussars, they certainly weren't militia. I represent them as equivalent to any other Chasseur or light dragoon regiment of any of the major combatant at that timeframe.  The point is, this allows you to field a "normal" light cavalry contingent with your Prussians, something other than a hussar or a landwehr regiment, however you rate them.  Unfortunately, two of these units (Ost Prussian and Pomeranian) had distinctive uniforms that are not represented well among the figures available. The good news, though, is that you can repurpose Prussian dragoons to represent them. 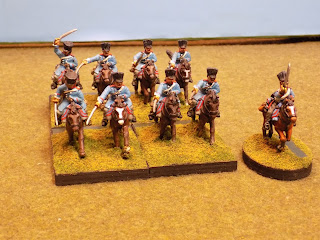 As I was building up my Prussians, there happened to be a good number of ready-painted Prussian dragoons popping up on Ebay. I scored on these, and had enough to outfit my Prussian cavalry division with dragoons, with enough left over figures to re-paint as two of the National Cavalry regiments that wore a version of the dragoon litewka: the Ost Prussian and Pomeranian...... 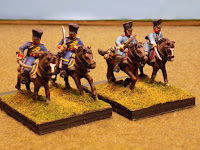 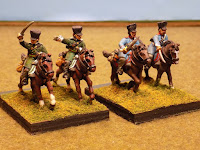 Before and After, Repainted as Ost Prussian National Cav (Left) and Pomeranian (Right)

So, I had a headstart with the horses and the headgear and faces.  The conversion consisted of repainting the saddle furniture and the uniforms, and touching up a few of the other bits to make the overall look of the unit consistent. 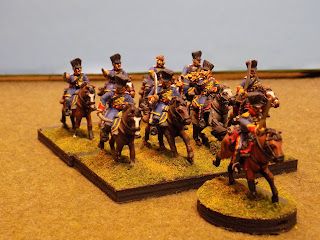 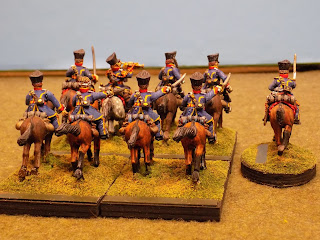 The Ost Prussian National Cavalry regiment had a dark blue litewka with hussar details: a very neat combination! This was my first crack at free-handing hussar details over a non hussar figure (a task that I would repeat later on with my 1848 Hungarian conversions).  This unit was actually armed with the lance, so I overlooked that bit (so far, nobody has stumped away from the table in protest). During the reorganization of the Prussian army in 1815, three squadrons of this unit were used to form the Guard Hussars and the fourth squadron went to be the fourth squadron of the Fourth Uhlan regiment. 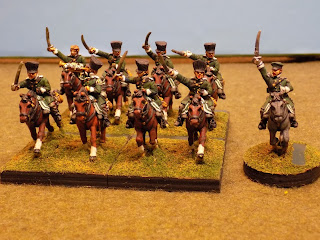 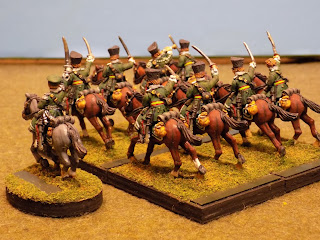 The Pomeranian National Cavalry Regiment had a green litewka with white polish cuffs and a very distinctive bright green girdle with red edging. To get the right effect for the girdle, I used an "old school" Testor's 1/4 oz green gloss enamel (later covered over with clear flat lacquer). In the 1815 reorganization, two squadrsons of the Pommeranian National Cavalry regiment went to form the Guard Dragoons and two squadrons went to the Fourth Uhlan Regiment.

SILESIAN AND ELBE (NOT PICTURED)
The Silesian and Elbe National Cavalry Regiments wore a standard hussar uniform, so a hussar figure could be repurposed for those, only in the appropriate color schemes.  I might add those later, but personally, I found that the modified litewkas of the Ost Prussian and Pomeranian regiments are much more novel and interesting.  That, plus when you put them on the table the French players, unless they are steeped deeply in Napoleonic Lore, don't know what to make of them--they kinda look like Landwehr, but they kinda look like dragoons, but they aren't either of them... 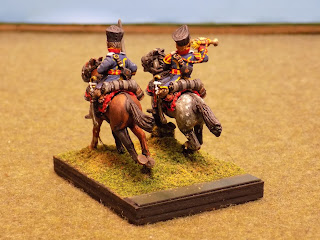 ...and they certainly help to debunk the idea of the Prussian Army as dull.

OF GARDEN GNOMES AND OBELISKS 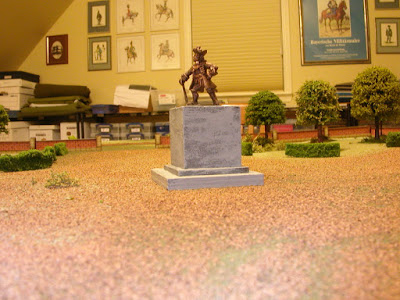 In this brief post, dear reader, we meander into the realm of tabletop eye candy and scenic effects. Several years ago, I ran a skirmish-level Napoleonic game (using a heavily modified version the Brother Against Brother rules). This game, entitled "A Walk In The Park" was inspired by the fighting in the Grosser Garten at Dresden, 1813, and other similar clashes. In this case, it was the Prussians vs the French (who seemed to have clashed an awful lot in close terrain, but that's another topic). This caused me to create a Garten of the sort found in various and sundry Residenzes in Germany.... 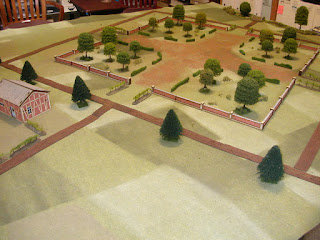 The Initial Version
...I came up with a pleasing geometric shape reminiscent of the era, and it worked for the playtests (I took this game and ran it at Huzzah! '16 as well as at a game night for my club). It stood up well enough in play... 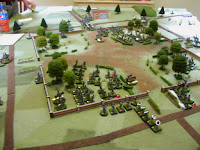 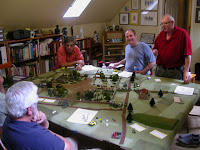 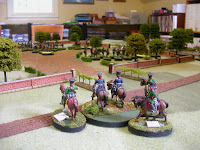 ...but something still seemed to be lacking... 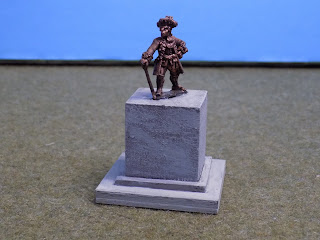 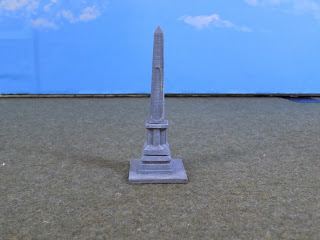 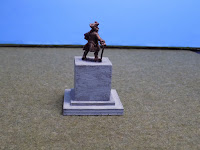 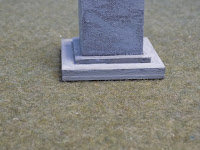 For the statue, I stumbled across this wonderfully evocative Eureka Seven Years War Russian General (which I can't for the life of me find on the interwebs any more!). He is  the very image in bronze of the proud Kurfurst of a local Residenz.  I used Humbrol antique bronze, a bit of wash, and few brushes of Testor's brass to shine him up--and "poof": statue.  For the base, I used a cube of craft wood sitting on two wargaming stands. Then I painted the rock-effect (which I am quite happy with--makes me wonder if I should start painting scenery as opposed to buying it ready: but that way lies madness, no more of that). The obelisk a bit from the Warhammer 40k terrain kit, "Stackable Obelisk." 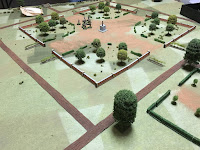 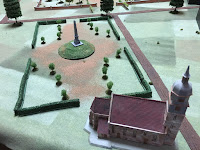 In these pictures above, taken as I was setting up my game at Huzzah '16, you can see the final form. I dropped the house at the crossroads and extended the table with the addition of the church and its Kleiner Garten, mit centerpiece Mound and Obelisk.  I also came up with some shrubs for the Kleiner Garten.  And of course, there is the Grosser Garten--mit Kurfurst.  The below picture is the setup during game night, which was prior to the Huzzah! Convention: no shrubs in the Kleiner Garten. 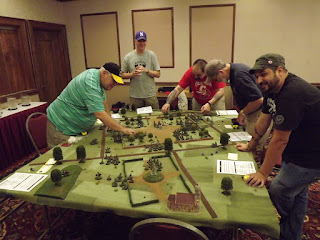 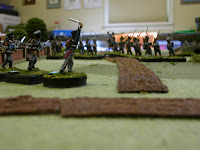 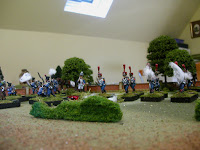 Now all can enjoy a nice walk in the park.