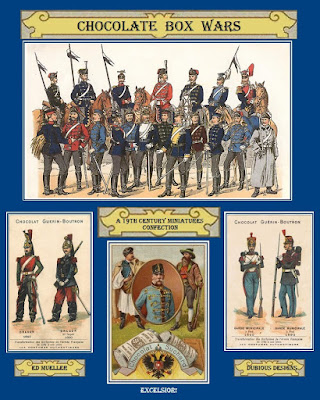 CHOCOLATE BOX WARS (CBW) (WORK IN PROGRESS)
In response to several inquiries about the Chocolate Box Wars rules, I thought I'd post what has been done thus far on its own content page. These are not complete (unfortunately), but I continue to work on them.  On this page you'll be able to find out more about this system. In the meantime, I have completed a workable Volley and Bayonet system that might be considered an interim.

Download a pdf of the current (incomplete) version of CBW
The above download includes mounting conventions, unit types, and force size.

VOLLEY AND BAYONET VARIANT (READY NOW)
I have worked out a Volley and Bayonet variant (at the battalion scale) that works with the same figures as the Choc Box Wars, so I offer this as an interim until I can get the new rules done. I've also suggested some options other than VnB for using the same figures (see the paragraph immediately above the Volley and Bayonet Variant for more).   As an aside, I fully intend to continue to play both the VnB variant and the Chocolate Box Wars rules once they are done--they aren't mutually exclusive.

Chocolate Box Wars: The Premise and The Promise
The working title for my rules system (still a work in progress) is Chocolate Box Wars, which should give you an idea of the approach. The armies, then, would be “Chocolate Box Armies.” Originally, I was going to toss history aside and build imaginations, but my grognard DNA just wouldn’t allow it (although this system will certainly accommodate this approach). Therefore, I stuck with researching and producing historical forces, although I have taken some liberty with timelines when compiling units (Others may certainly apply this system to their imaginations forces (and imaginations yet to come). In support of this approach, I hope to eventually have some AK-47 Republic-like nationally flavored lists that will allow one to model forces along certain lines in the spirit of the era, like Mittel Europe, Teutonic, Gallic and Anglo Saxon (to name a few).  My intent is to make this page mainly about the intent and rules themselves, so I've left out other diversions. Those with a bit more curiosity or time may want to read the "Diversion" and "Inspiration" passages from my March 15 Post. 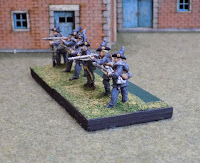 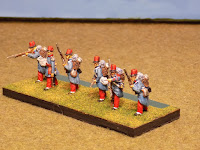 Here is the concept in thumbnail:

Chocolate Box Wars: The Key Ideas
The era is loosely defined as extending from post-napoleonic to pre-khaki with the following guiding principles (if interested, I recommend downloading the pdf of the rules at the link below the opening image in this post):

1. Stand-based (two stands per unit; one for artillery) to allow for basic formation effects.
2. 28mm, with stand size 2.5” x 2” for infantry; 2.5” x 2.5” for cavalry; 2.5” x 3” for artillery.
3. Low figure count (3 infantry per stand; 2 for cavalry)--this also winds up being how many of today’s largish figures can easily fit on a stand of the above sizes.
4. Army-list approach, with a relatively low total stand count (sort of like DBA/M) and a "plug and play" approach: a set number of units per army (so you can build a force quickly).
5. Unit differentiation that allows period and other flavors (volunteers, frei corps jaegers, etc).
6. Simplified mechanics that will still reward handling units as a coherent force. Right now, it's a cross between DBA and Volley and Bayonet light.
7. Unspecified unit level (although I'm thinking that each unit might represent either a battalion/squadron or perhaps a brigade/regiment, with each stand then being a wing or division of that larger element--given the Volley and Bayonet variant that I've done, I'm also thinking that there might be a "big battle" version as well). 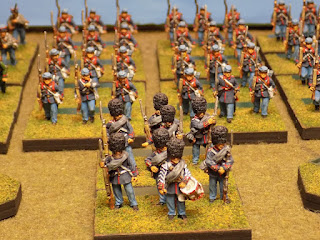 The number of stands per force may be modest, but if all else fails, it will still allow me to use my collections to play other systems, like  DBA HX 1700-1850 or versions, the DBA 1500-1900 Extension  or a half scale version of Bruce Weigel's 1859 or 1866, a small to mid-sized Volley and Bayonet game, even if not using my variant (See next paragraph for more on this), or possibly a small or modified game of Bloody Big Battles. 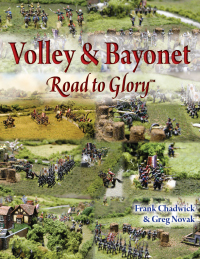 I have created and playtested a battalion scale variant of Volley and Bayonet that has worked very well with my Chocolate Box Wars figures (see the Battle of Hatvan game report for an example of the most current version, or the Danish Delight and Battle of Dybbol reports, which were done using earlier versions).


Although you might be able to work out the system based on the reference sheets and other information I've provided on this blog, you will probably need to have the Volley and Bayonet to make sense of things. My notes on the variant are important and should help to and explain the variant and how to implement it for yourself.


Watch for posts on the main blog announcing updates to this page.


Until then, dear reader, adieu...