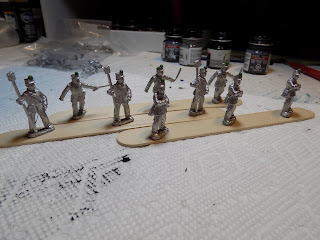 I mentioned in an earlier post that my Hungarian/Honved contingent was complete--with the exception of command and artillery. Regarding command, I have commissioned a mounted Hungarian command figure with Steve Barber that will work nicely as a generic middle level commander, and I know of another higher level command figure in the works commissioned by another person. I get the feeling that one or both of these might be coming out soon. As far as the artillery, I recall seeing a news item (I don't recall exactly where) more than a year ago showing Hungarian/Honved artillerists. As such, I have been anticipating the release of these for some time. In the meantime, I moved ahead, figuring that given my pace and other projects that it would be unlikely that I would be at the point of completing my Hungarians before the gunners came out.  And of course the unlikely has happened.

Having reached this point, I've decided to go ahead with "Plan B" and convert the North Star 1866 Austrian Artillery figures I have on hand into Hungarian/Honved Gunners rather than wait any further.  Momentum is with me, and I don't want to lose it.  As far as comparability, the Austrian kit is very close to the Hungarian, the major difference being the Austrian small form shako as opposed to the Hungarian full sized one. However, the Hungarians also wore the kepi, which is what I'm using as my license to steal. Thus, I will do my Honved gunners in kepis, which will not only set them apart from their similarly brown-coated Austrian adversaries, but add a dash of color as well, with Hungarian "red cap" gunners and gunners in the standard blue kepi. 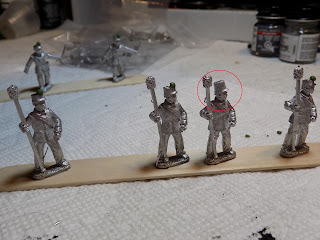 Of course, I couldn't just paint the Austrian shakos like kepis and leave it at that--oh, no, this would never do! Instead, I decided to undertake a small conversion: I would reduce the height of the shako to kepi-size and add a Hungarian pompom. For the curious, this was a fairly simple process, involving a small wire cutter, an exacto knife, a dab of green stuff, a stream of muttering and invective--and Bob's yer uncle, Hungarian gunners!

The way of the world being what it is, I fully expect to see, ere this lot is done, some beautifully rendered Hungarian gunners among the "New Releases" on the Steve Barber website. In that case, I'll certainly be among the first to get them, but given this process, I'll probably feel obliged to convert them into something else (perhaps Mexicans...). Take this as a cautionary tale, dear reader, to avoid the conversion mania or you'll wind up like me! 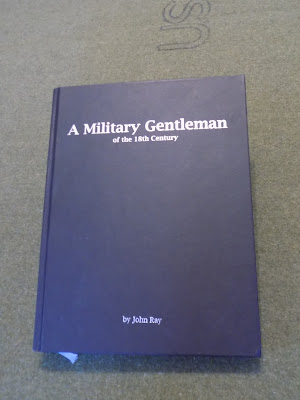 A major project at work has consumed much of my energy and time for the last few weeks, so not much time for blogging. However, things should be reaching equilibrium again. Despite being busy, there has been some hobby related news that might be of interest. Last year, I picked up John Ray's magnum opus, A Military Gentleman of the 18th Century (pictured above)--known to those in the know as AMG.  This week, I took the time to run a much-anticipated errand to fetch the book from my local bookbinder, where it had been since before the holidays (more on that in a bit)...

For those not familiar, this tome is a labor of love (obsession?) in which the author, John Ray, and his collaborators (artists, figure sculptors, painters) tell a story illustrated by glossy, full color photographs (hundreds of 'em) using 18th Century figures (hundreds of 'em--maybe more) in tabletop settings, complete with custom terrain. The author is extremely protective of his material, so I won't put up images. For a full (and better) description, along with selected images, I would direct you to the first post on John Ray's AMG blog. The book has a limited run of 500.

Although the AMG blog page says that all available copies are sold, there are books that were sold through  Ken Trotman Books, which is where I picked up mine (and they seem to still have some availability there now).   Checking on Amazon will also turn up some copies  (right now, there several there, but more costly than the Trotman, depending on the exchange rate). 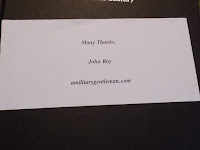 My book is #362 (stylishly late to the party); it came with a nice thank-you note from John Ray tipped in. For those who may not know, there is an AMG community, initially promoted in part by a discussion group that owners of the book had access to.  I didn't come by the book through the community, per se, nor have I tried to gain access to the forum. Nevertheless, I find that I come across references to AMG among many blogs I visit--birds of a feather, it would seem. 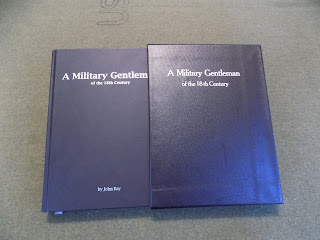 My AMG, With Slipcase
The AMG was/is a production that clearly was done with an eye towards the ends and not the costs.  This was a book intended for enthusiasts, and price did not seem to be a factor in marketing (and obviously not a barrier for those who purchased it).  Given all of this, the absence of a slipcase jumped out at me once I started handling the book. It just seemed to call out for one, at least to me (this may just be my problem, given my bibliophile tendencies).  [Note: John Ray has left a note in the comments indicating that a slip case or some other similar addition was considered, but was found to be cost-prohibitive: I stand corrected--thanks, John, for the information!]. Fortunately, I have a trusted local bookbinder that I have brought other books from my collection to for restoration and binding.  It occurred to me to  take my AMG there and have a slipcase made.  This week, I brought it home, and it's just the thing! Not a bad after-market addition (and it does not modify the original).

Images from the 2017 AMG Weekend, from the excellent Carryings On Up the Dale Blog

Speaking of associations of like-minded folk, the idea of the annual AMG meeting is a temptation--a trip across the pond to the UK, with some sort of gaming included in the itinerary, is always percolating in my mind. Until I translate that thought into travel, I'll still have the book to peruse and the virtual AMG (and AMG-minded) community in the blogosphere to associate with. Speaking of which, I would be interested to know if there are any "AMGers" who have stumbled across this blog. 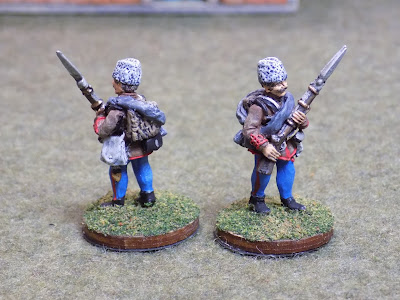 A study of two individually mounted figures of the Honved 24th (White Cap) Battalion in their fur caps. All figures in this post are recent releases from the excellent Steve Barber Revolutions In Europe Line.

In this, the first substantive post of the new year, dear readers, we hearken back to a project  I reported on in my last, pre-holiday post. This project was actually completed in the days before the Yule, so these units may henceforth be nicknamed my "Christmas Infantry."  These round out my Hungarian Infantry contingent for my Chocolate Box Wars project: as a matter of fact, all I need now are some command figures and artillery and my Hungarians will be complete.  In the meantime, here is a study of the painted figures.

As described in my previous post, this project involved the creation of three units. The 24th (White Cap) battalion (represented twice: one in kepi and one in fur cap), and the 9th (Red Cap) battalion. Images above of the 24th and 9th battalion uniforms are from the excellent Gyozo Smogyi Honved Army 1848-49 book (a must-have for anyone interested in the period).   I commissioned these infantry in kepis and the officers advancing with sword, but the fur-capped figures were a pleasant surprise.  Upon seeing them, I had to add these to the mix! In the below studies, you may clix pix for BIG PIX. 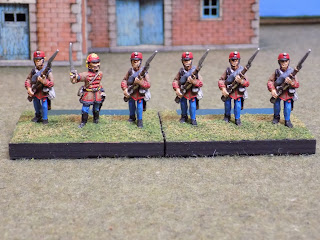 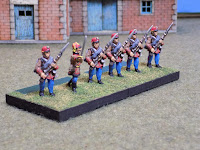 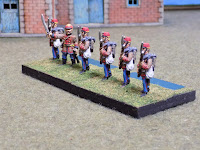 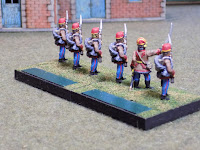 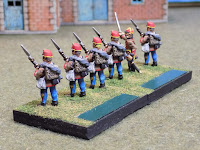 Once again, I lost track of how many different shades of brown (and tan) I used to keep the jackets, backpacks, rifles, and whatnot from looking like one big blob.  I will say that Humbrol "Brown Yellow" is one of the greatest discoveries I've ever stumbled across (I can recommend it for highlighting darker browns). 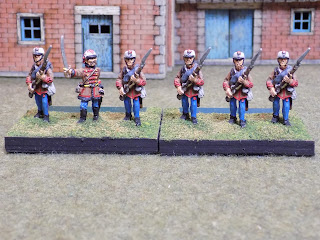 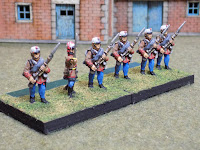 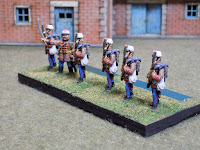 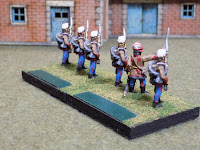 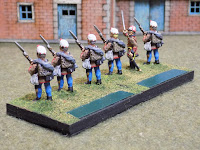 One item that I probably wasted too much time on was the red/green/white piping around the base of the kepi. It probably won't be so evident at playing distance on the table, but what the heck, it was an indulgence worth trying. I'll know it's there. 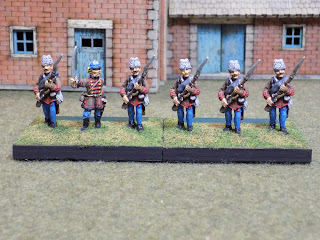 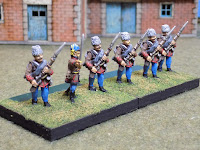 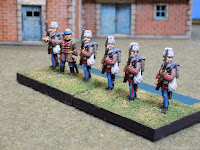 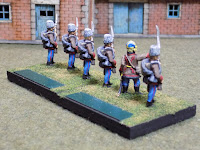 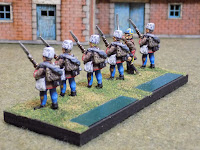 Okay, technically, this is the 24th (White Cap) battalion again, only with winter headgear. But these figures were just too cool to not have! So I'll bend history a bit.  If you see them on the table next to their kepi-headed comrades, let it be our secret! 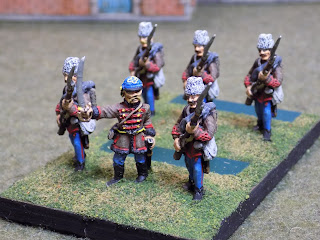 If I have to paint one more hungarian knot my head will explode! 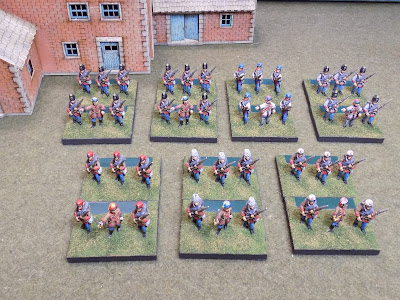 The array of my Honved line infantry in its varied headgear and uniforms (and hungarian knots).  It certainly makes for a colorful force (and adding the national guard, rifles, and grenzers will make it even more interesting).

I hope this post has proven interesting (and tempting) for those who have seen the recent releases from Steve Barber, and for those with an interest in gaming the continental wars of the mid century in general.