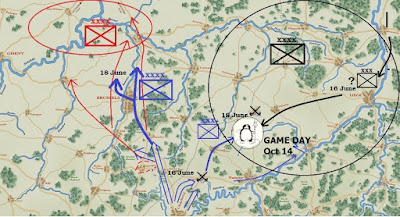 Our game club holds annual "Game Day" events, which run on Saturdays and involve upwards of 20 players (depending on turnout). Activities can consist of multiple games, a series of smaller games, or some sort of large game. In 2017, I was responsible for our Game Day and put together a large 28mm Napoleonic game that accommodated 20 players. In this page, I share the supporting materials I used to run the game, along with some background information. For more, see the blog report on the game.

The setting for the game, Ramillies, 1815, stems from an alternate version of the 1815 campaign.  The narrative (below) explains the scenario, and is matched to the map at the head of this page (the map is from the Columbia Games site, and the penguin, in case you were wondering, is the club mascot):

15 June, 1815. Napoleon has crossed the frontier and concentrated at Charleroi, pushing back the Prussian pickets. He orders Ney to take command of the left wing of the Army of the North and press north up the Charleroi–Brussels road towards the Anglo-allied army to "drive back the enemy" while Napoleon drives up the Fleurus road to do the same to the Prussians.

The Prussians are concentrating in the vicinity of Fleurus (Ligny), while Wellington, who has been “Humbugged,” gives orders for the Anglo Allied army to concentrate at Nivelles (these were the actual orders). The Prince of Orange and Bernhard of Saxe Weimar, as they did historically, move to Quatre Bras on their own initiative to block the French.

16 June, 1815. Wellington, not recognizing in time that the French are not flank marching towards Hal, fails to reinforce Quatre Bras. Ney follows his orders more effectively than in history and breaks the unsupported Anglo Allied Force at Quatre Bras. French pursuit disrupts the Anlgo Allied attempt to concentrate at Nivelles. Napoleon decisively smashes Blucher at Ligny.

17 June, 1815. Isolated from the wrong-footed Anglo Allied army, the shattered Prussians are forced to retire towards Liege. Blucher, who was overidden in a cavalry action, is wounded and out of action. Von Gneisenau assumes control of the Prussians. Napoleon shifts the main effort towards eliminating the Anglo Allied Army. He turns to Grouchy and detaches a wing of the Army of the North to pursue and complete the destruction of the Prussian Army of the Lower Rhine.

18 June, 1815. Wellington, gathering together his forces Hal, is obliged to retire, with Napoleon in pursuit. Meanwhile, the pursuing Grouchy collides with lead elements of a Prussian force advancing from Hannut. Apparently, Gneisenau has rolled the dice and brought the only remaining Prussian forces in theater forward. A meeting engagement is developing in the Ramillies Gap between the Mehaigne and Geete rivers.

The game was designed to put players in the role of division commanders, complete with limited intelligence and real decisions that had to be made. There were three tables. A large, central main table (Ramillies) of 20'x6', flanked by two approach tables, one Prussian and one French, each of 18'x5'. Each side would start with a small force on the approach table (an advance guard), with the remainder arriving at entry points based on the order of march. This meant that major formations from each side would successively be arriving, and then converging on the main table. There would be limited communication. At the end of each turn, there was a five minute command phase during which only written notes could be passed among players (between major commands). Additionally, players were not allowed to leave their side of the approach table until their units had marched onto the Ramillies table. Once on the Ramillies table, players were not allowed to go around to the opposing side (unless they had broken through to the opposing approach table). Thus, it was a dynamic meeting engagement in which both sides were moving towards the other and reacting (or trying to react) to what they saw coming (or thought they saw coming). Towards this end, I had toy telescopes available for each side to use to look across the room at the other approach table (not alot of magnification, but lots of campy fun).

The game was played using our group's rules, Napoleon's Rules of War, so the orders of battle have some ratings that reflect that system. That shouldn't be an obstacle to reading or using the material, I believe. Although the game is set in 1815, my armies are built for the 1813 Campaign, so deft observers will note that my Prussian (especially) OOBs reflect the 1813/14 designations (nobody seemed to notice in the club on Game Day). The maps also had to be warped quite a bit in order to fit into the elongated form of the wargames tables (they were modified from the Osprey Ramillies book, as noted in the files).

All the game files are available at the following link, to include special rules for the large game. I think that they collectively should provide a good explanation and feel for how the game was managed--and some ideas for anyone who would like to try to run a similar large game. Feel free to drop a line or ask questions.


RAMILLIES 1815 GAME FILES
(as per usual, once you choose a file--all are pdfs--ignore the "open with Lumina Pdf" thing at the top and instead go to the upper right hand corner of the screen to the downward pointing arrow icon to download the pdf).