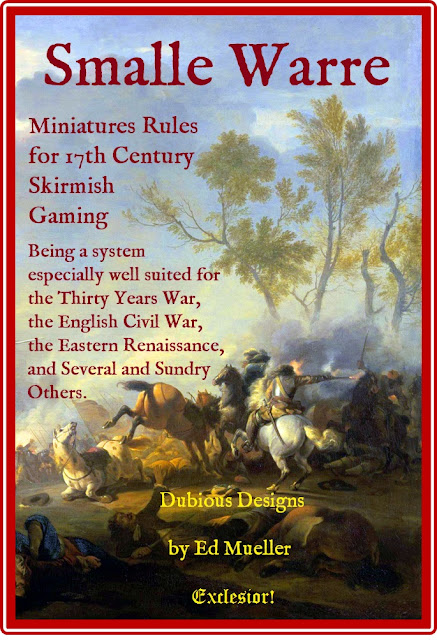 This is a home grown rules system that I've been playing and developing for ten+ years (something I hadn't realized until someone recently asked me during a convention game...ugh).  I have run games using this system at major HMGS East conventions (Historicon, Cold Wars) as well as at smaller regional conventions (most recently at Huzzah! 2017), and also with several club groups --and many times at my house with my own circle of friends.  At this point, it can be safely said that the rules work: there are few if any "holes" in the system (whether or not people agree with or like them is another matter).

The project in its current state represents an amalgem of all the rules I've played (and stolen from...er, been inspired by) and my interpretations and modifications since based on running these games (and thanks to the players for their patience and input over the years, most notably the members of my current gaming club, The Northern Conspiracy, who have provided much useful feedback).  I originally purchased a commercial set of skirmish/low level rules for the era (which I will not name) with the intent of using those "off the shelf."  Unfortunately, those rules had more holes than substance. By the time I had filled-in the absent mechanics and worked out systems to handle all the questions that came up in play, I was 3/4 of the way to a new system, so just continued along that path.  The scale is low, but unspecified.  Like many other low-level systems the number of figures in a standard unit is 10 or 12 (although you could easily field smaller units and it would work just as well--if you get to the unit cards, you'll see an example in a small bodyguard unit I created).  This system also allows you to use detached single figures, so you can mix units and individuals on the same table. As far as scale, I have a Larry Brom-like answer on that one. If you must have a number, think of each figure as more than 1 man, less than 5.

The components of the system currently consist of player reference sheets, unit characteristics reference, unit cards (others may just want to use unit characteristic charts), various markers, and a few other support items (all available for download in more organized fashion at the bottom of this page).  This is all enough material for me to facilitate games. Although these components are largely self explanatory, I have yet to produce an accompanying set of narrative rules to bring them all together to explain to others.  Based on prompting from players, though, I'm sharing what I have.  Towards this, I have put together a set of notes that should, combined with the other components, allow those who have played the system to organize their own figures and run their own games. Players unfamiliar with the system should also be able to play as well, but may have to apply their knowledge of other skirmish level systems to fill in any blanks they may run into (or by posting a question or two).

HERE IS THE ABBREVIATED FORM OF THE RULES
Go to the bottom of this page for links to download the other components (player reference sheets, etc).


EXAMPLE UNIT CARDS:
Reference sheets aside, the heart of the game is in the unit characteristics, which I record on unit cards. Below are three examples that should prove instructive.  I've included my entire set of unit cards among the downloads.  Here is a tour around the card: the color code in the upper left hand corner corresponds to a colored plug on the back of my figures (not necessarily the uniform color). There are only so many colors, so you'll see them repeated, but the combination of the unit type, the picture, and the color make for distinct units on the table.  Leader information is in the box below the unit picture. Soldier information is in the box in the upper right, with any special attributes in a box below that.  If the unit has protection, there is a box in the lower right with saving throw information (these are for the soldiers--leaders have inherent saving throws as listed in the leader box). Saving throws are all d6 based.  I use small markers on the table behind the units to show that they have yet to be activated.  When a unit activates, the marker goes from the table to the card (in the box in the lower right hand corner).  There is an additional marker to show the unit has run which goes there as well (units can't run two consecutive turns, so this provides an easy tracking system for when units can and can't run).   Unit cards aren't necessary to play, but I've included mine for reference in order to make sense of the system (and to see how I rated various types of units: feel free to go your own way).
Arquebus: 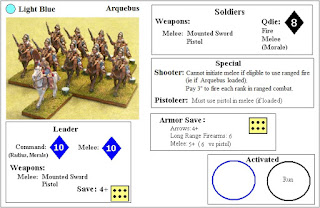 In the above card, you see in the leader box below the picture that the leader rolls a d10 for both morale and melee (d10 are blue), and has an inherent 4-6 save (d6 are yellow).  Soldiers roll a d8 (black) for everything (upper right). The unit has two special attributes, "shooter" and "pistoleer" and the soldiers have armor saving throws vs arrows, long range fire, and melee (d6 again, yellow). 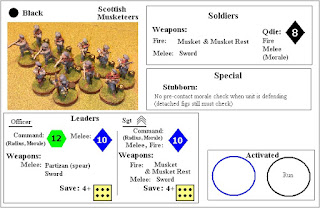 In the case of the Scottish Musketeers (above), there are two leaders (Officer and Sgt). Notice that the SGT uses a d10 for command and melee, whereas the Officer has a higher command rating for morale purposes (d12: green) and uses a d10 for melee.  In the absence of the officer, you would use the SGT's rating for morale checks. In the absence of leaders, you use the soldier's Qdice. You will also notice that the unit is equipped with musket rests (in the Soldiers' "Weapon" category), as opposed to the dismounted dragoons, who aren't. This allows units like these to move and gain the rested musket advantage in the open (provided they spend an additional 3").  Units without musket rests would have to use a linear obstacle (like a low wall) to get a rested musket bonus.

If you want to just preview the reference sheets, you can go to the  player reference sheet and the unit characteristics  sheet directly at these links.

A note on the player reference sheet: The front side has movement (green) and command/cohesion (blue); the back side has combat and saving throws. All references to dice numbers are in yellow.

Some advice on downloading material: Ignore the "Lumina PDF" tab at the top of the page. Instead, look in upper right hand corner of the window for an icon of a downward pointing arrow over a line  (if you hover your cursor over it, it will say "download").  Click on it and you'll have the option of opening the file (in which case you can "save as" from the file itself), or you can Choose "Save File" in which case it will download to your computer (remember where you choose to put it or where it says it's going...).

Feel free to drop a comment if you visited this page and downloaded any of the material.