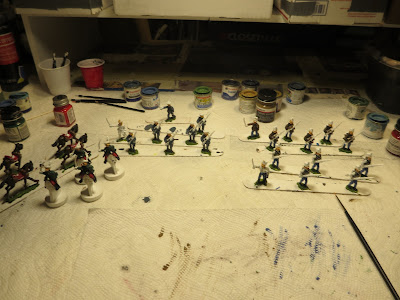 With a high profile project coming to a head at work this week, I thought I'd blog a bit now while I have the mental space and physical time to do so.  This is a work in progress post, but it is work such as I have never done before: four different units concurrently. Not only are there four unique uniforms and figure sets, but there is a mounted unit mixed in with infantry.  Normally, I would stick to one figure type or style at a time, and certainly would never do infantry and cavalry together. But for some reason--perhaps its spring fever--I am feeling impatient with the normal pace of painting, etc.  A rational part of me knows that doing these together is no shortcut(x number of figures to paint = x amount of time and effort, regardless), but this way I at least avoid the mental setback of starting over x4.  There is only one start point and all are progressing together.  I'm also eager to get this whole batch off the assembly line since these will be useful for both my Hungarians and Austrians--and there are some unique units here, too.  I definitely want to shift to gaming more vs painting as the year goes on. This batch will be a boost towards getting there. As usual, you may clix pix for Big Pix in this report. Here's what's in the pipeline:

This cavalry unit was inspired by the above images (left from the Knotel  site and the above right from the NY Public Library Vikhuijsen Collection).  Love the jaunty headgear.  I picked the color scheme of the dark green with red trousers.  These fellows will be able to serve with either my Hungarians or with my Austrians: 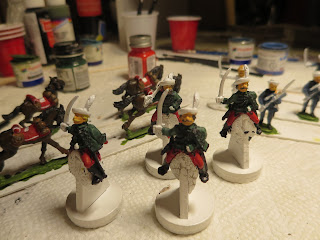 I'm using Foundry Maximillian Adventure Austrian Red Hussars for them. This unit was actually a unit of Austrian Freiwilliger Hussars (so the uniform is essentially appropriate). 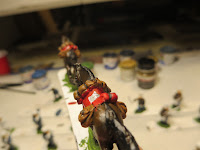 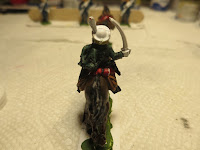 These are spiffing sculpts, but I did have to cut off the left half of the blanket roll to make room for the hanging pelisse in order to seat the figures (for the troopers: the officer, since he has no pelisse, sits just fine). I probably could have rummaged about my spares box and come up with three horses, but I liked the mounts that came with these and wanted to give them a go. I think they'll be just fine.

Inspired by these jaunty fellows above (again images from the NYPL collection), I decided to include a unit of Freikorps infantry--these could be fielded with either my Hungarians or Austrians. 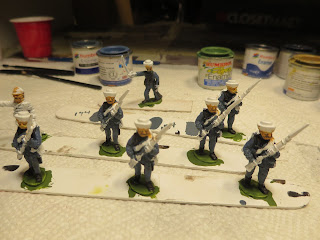 The headgear's the thing for these units, and the Steve Barber Honved Infantry in Porge Kalap fits the bill.  There were various units and variations on this uniform, but I am aiming for the mid blue with black distinctions as seen in the prints. You'd never guess by the photo that these figures have two shades of blue (Humbrol Azure blue base with Humbrol World War I blue dry brushed over).  But the effect, nevertheless, renders a good result (so far). 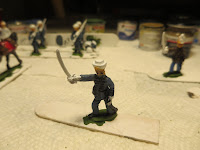 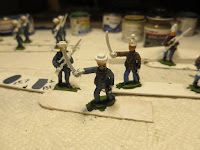 Of course, there is a conversion involved!  You knew there had to be.  To get a Freiwilliger officer (above left), I did a head swap (above right) using the torso of a Steve Barber Honved/Hungarian Officer and the head of one of the infantry in porge kalap.  So far, so good. 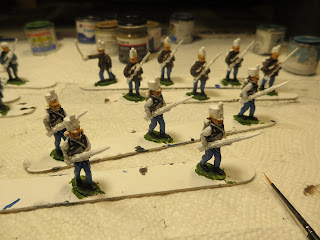 During the Hungarian Revolt, many of the Hungarian Infantry units of the Regular Imperial Army fought on the Hungarian side.  They continued to wear their Imperial uniforms (except for black strapping and Hungarian cockade). So, I thought it would be good to have some white coated fellows among my Hungarians. It's taken some effort to keep all the black strapping from looking like a solid "cuirass" across the chest.  The single white strap of the bread bag looping over from the right shoulder to left hip has proven to be a saving grace in breaking up the black. I'll continue to pay particular attention to this area as these figures progress.  These are Steve Barber Szekely Infantry Advancing; they will serve equally well as Imperial infantry in Hungarian service. 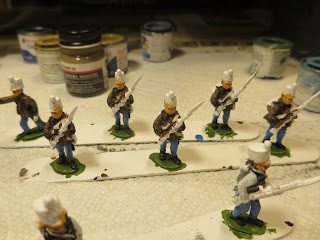 Still lots of painting and then plenty of touching up to go before these are presentable. I expect that I'll be spending a quiet hour or so per night on these for this week.  I hope to have this project (four projects?) wrapped up in time for my next post (or the one after that, if not).