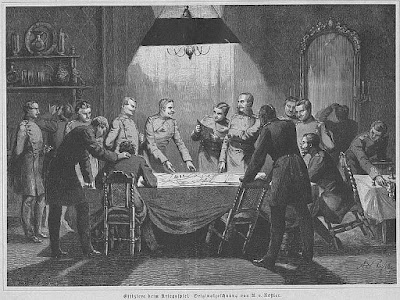 Adalbert von Rößler, ca. 1875 or 1884: Offiziere beim Kriegsspiel
A busy time of year at work, some family business, plus another bout of back problems, have arrested tangible hobby activity in these parts.   Nevertheless, during such times I continue to meander mindfully, if not physically, in the hobby.   As such, I thought I'd share a brief post on the thinking and reading I've been doing during this lull. I have revisited the Von Reisswitz Kriegspiel.   Specifically, I was dwelling on the way that the rules rated infantry fire.  I started with the 1824 version and then went on to focus on the 1828 revision (the latter being done by the Berlin Kriegspiel group).   There won't be a ringing conclusion or insight in this post (spoiler alert), but hopefully there will be a few tidbits of interest. 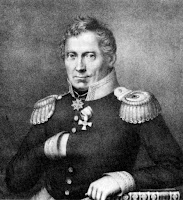 As a rules tinkerer and writer, my interest in the Von Reisswitz kriegspiel system stems from the fact that its author was a veteran of the Napoleonic wars, as were many, if not most, of the officers who also embraced it (and would go on to do the 1828 revision).  When looking for insights into systems for handling various aspects of black powder (and mid century) warfare, what better source could there be than a system that was endorsed by those who actually lived the simulation? 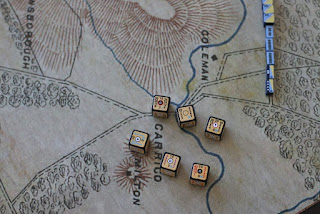 The original version relied on specialty dice to resolve combat action.  In the case of infantry fire, there were two dice, one for good effect and one for bad.  In the 1828 version, this would change to one dice for fire vs troops in the open and one for those under cover. 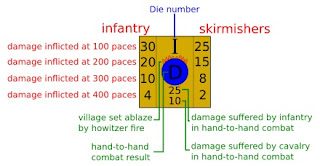 These dice were very busy, each face having multiple bits of information (as you can see in the above illustration).  Later, authors (Bill Leeson among them) would break out the information on the dice faces into different categories (infantry fire, artillery fire, melee) and put them in easier to read in tables. 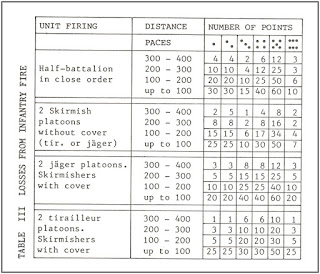 The figures for infantry fire were based on the famous Scharnhorst "Wirkung des Feuergewehrs" tests, adjusted and modified by observation and experience, to reflect fire under combat conditions (as opposed to ideal test conditions).  Firepower was expressed in points.  The later 1828 revision would further modify the fire results, lessening the effects compared to the 1824.  There will be a bit more on that later in this post, so I beg your patience for now, dear reader.

Returning to firepower, the below is what the rules have to say concerning the translation of points to casualties:

It is most interesting to note the low casualty ratio for cavalry compared to infantry targets.  This makes sense (to me) given that the horse and rider would be larger individual targets (true), but there would also be fewer of them in the zone of fire because of their size-- and also that cavalry formations tended to be pairs of single ranks spaced widely apart in successive lines, so once again fewer in the zone).

The kriegspiel then helpfully provides the point-values for the main formations in the game:

Moving on to the 1828 revision (which retains the above point values), below is its revised infantry fire table:
1828 Infantry Fire Table


As far as the probabilities, Von Reisswitz stated that one side of the dice would be the best effect, one side would be 1/2 effect, two sides of the dice would be 1/3 effect, and two sides would be 2/3 effect.  Given this distribution, there was no reference to the corresponding numbers on a six sided dice.  Thus, I find it very interesting that in all of the tabular conversions I've seen (as above), the columns aren't rationalized along the familiar 1-6 continuum. As such, the progression, as described by Reisswitz, is hard to recognize.  So I decided to see how the table would read using the same figures and distribution, only arranged in the familiar progression along the 1 (worst) to 6 (best) results.
.
1828 Infantry Fire Table Rationalized For 1 (lowest) to 6 (highest) Results

Moving on from the above, in order to compare further, I worked out the aggregate point totals (the sum), the average results (rounded up), and the median result (again, rounded up), for each line.


It is instructive to see how close the firepower of two platoons (zugs) in skirmish, particularly jagers, compares to the firepower of a formed half battalion (which would be four platoons/zugs).  Another interesting point that emerged from this study is the effectiveness of skirmish fire vs targets in cover as opposed to the formed half battalion.

This is all grist for the mill as I tinker with rules and such--it keeps my head "in the game" anyway, during times when hands-on hobby activities are arrested.