PULLING OUT THE TOYS: HUNGARIANS AND AUSTRIANS ON PARADE, 1848-49

A Proud Mid Century Austrian Column Marching in the Sunshine

With the several and sundry latest additions to my Austrians and Hungarians, I can now realize my desire of shifting activity more towards play and less in production (although one knows better than to tempt the wrath of Imp of the Lead Mountain by saying that I've "finished" a project).   Towards theses ends, I've been revising my Volley and Bayonet 19th Century Battalion Scale variant (always a work in progress), making it more streamlined and flexible (this latest version is not yet posted).  In so doing, I stumbled on an idea for using multi-stand units as opposed to the standard VnB single stands. 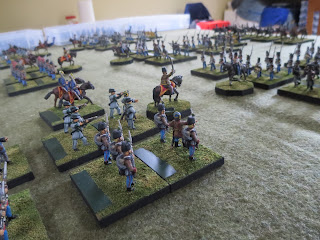 Looking Over the Shoulder of the Defiant Hungarians

A week or so ago, my friend George came over and we had an impromptu game using the latest version, to include multi-stand units.  There are no pictures to show (sorry!), but we both agreed that it had a very good feel.  Having not exercised my 19th Century figures since my Battle of Dybbol games, I intend to follow up on this gaming and painting momentum to debut my Austrians and Honved/Hungarians in a game based on a battle from the Hungarian Revolt pitting a Honved Corps vs an Austrian Corps (basically)--just about the right size for my troops using multiple stands per unit.  I have been tinkering with organizing the armies for this game on paper, but I just haven't been able to wrap my head around it.  So, I decided that I would instead pull out my troops and lay them out in various configurations rather than fiddle with paper any more. Once I had them  out, though, I thought, "Neat: I'll take some pictures!"  As usual, in this report, you may clix pix for BIG PIX. 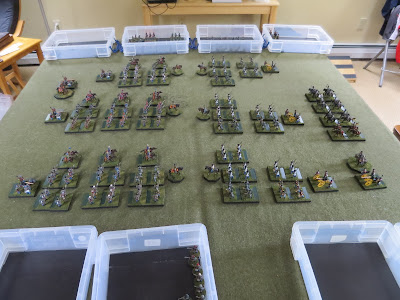 I first laid out the troops to conform to the historical OOB.  I had the figures for it, but the configuration would only really work for four-players.  The standard for our club is six and the same generally goes for a participation game at a US convention.  No problem:  I always start with a real battle and then make a "game" out of it.  Thus, I took the base historical brigade and division structures and replicated them to bring the game up to a six player game: three divisions per side, each of 5-6 battalions, plus cavalry... 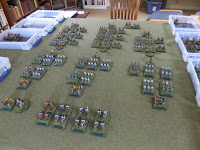 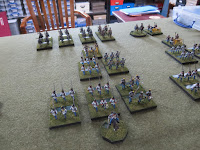 ...(Above Left) A View from behind the game-version of the Austrian III Corps:  three infantry divisions of two brigades each, with artillery.  There is a separate cavalry division at the back.   (Above Right) Close up of one of the Austrian infantry divisions. Each battalion is two stands. This exercise caused me to see that I needed to convert some singly mounted Austrian infantry I had on hand into an additional battalion (which will bring the second brigade in this division up to three battalions). 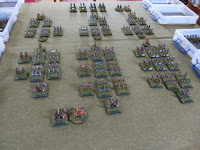 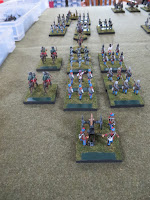 (Above Left) A view of the game-version of the Honved/Hungarian VII Corps: three divisions of three brigades (except for one smaller division with two), each with a cavalry contingent.  Although organized very differently, the total cavalry stand count is the same for both sides. The Hungarians did have separate larger cavalry formations, but I won't add one for this game (at least I don't think so at this point). (Above Right) A view of the smaller Hungarian division: two infantry brigades plus cavalry and artillery. 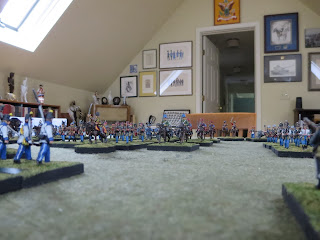 The calendar is rather jammed for the immediate future, but I'm very much looking forward to getting this game ready and these troops on the table this summer.