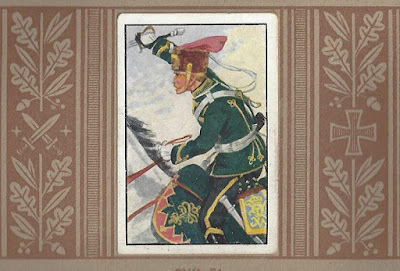 In this post, dear readers, we cycle back to our Oct 29 WIP post "To Arms, To Arms!" in order to shew the completion of a unit found there: the Prussian 10th (Magdeburg) Hussars. 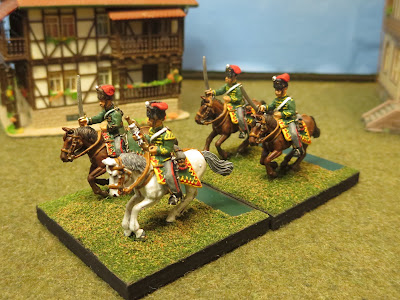 Having added the Northstar Prussian Leib Hussars to my collection earlier, when I saw that Northstar had expanded their 1866 hussar line to include figs for other (non-totenkopf) units, I decided that I had to add another unit of these figures.  I was originally thinking of  the ever popular brown-and yellow Silesian Hussars (Hussar Rgt 4), but I already have those among my Napoleonics.  I therefore decided to instead go with the less represented 1oth (Magdeburg) Hussars, an equally colorful unit in their distinctive dark green uniforms with yellow details.  I particularly liked the combination of the yellow "wolves teeth" and red border on the saddle furniture (challenging though it was to render).

The 10th Hussar Regiment does not have the lineage of the first five Prussian hussar regiments that stretch back to Frederick the Great, but it has an impressive resume stemming from the Befreiungskriege (1813/14) onwards--so it is very much a distinguished unit of the wars of the mid-century.  It began as the Elbe National Cavalry Regiment and participated in the Waterloo campaign with the IV Prussian Armeekorps (being engaged at Wavre). It was then incorporated into the regular Prussian Army as the 10th (Magdeburg) Hussars and participated in all the major wars and campaigns up to and including the Great War.  Interestingly, it was represented among the German East Asian Expeditionary Corps during the Boxer Rebellion.  Here is my study of how I rendered this unit (as usual, you may clix pix for BIG PIX): 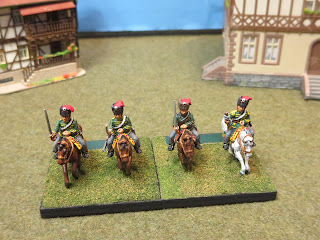 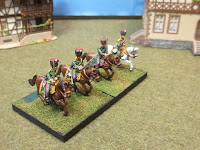 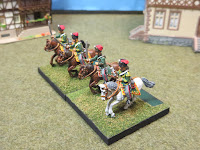 These figures are in coveralls whereas the Northstar Leib Hussars are in boots: a minor difference (other than the headgear: these have the bandeu as opposed to the Totenkopf badge) 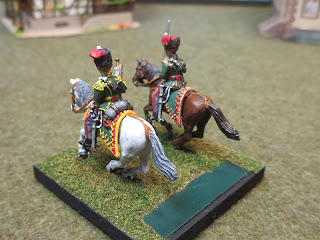 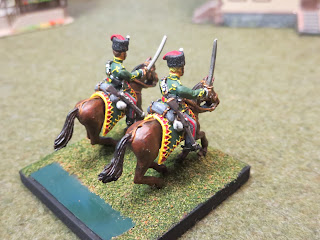 When doing the earlier Leib Hussars, I cracked the code on the detailed strapping and equipment on these sculpts (fore-warned is fore-armed). 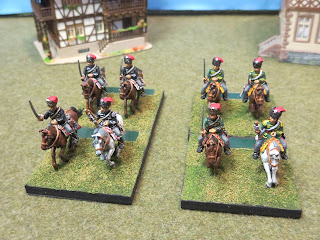 The Magdeburg Hussars take their place next to the Leib Hussars.
Given the time of year that they were completed and the green and red color combination, I think these will be nicknamed the "Christmas Tree Hussars"!✨ 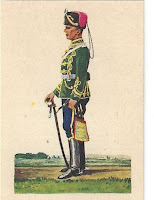