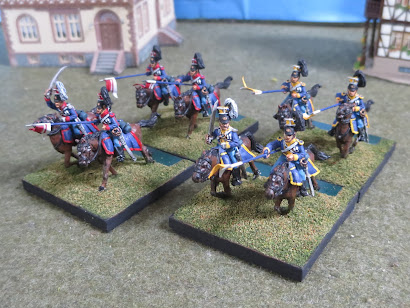 Conversion to Russian Uhlans of the Russo Turkish War Era complete
In this post, dear reader, we are happy to provide an update on the progress of the Russo Turkish War Era (roughly) Russian Army project.  I am steadily working my way through the cavalry, and with the completion of these uhlans I am now more than half way through the mounted contingent. These are, once again, conversions, the details of which I provided in the previous work in progress post--so I'll only summarize for context here:

These figures began life as Perry 28mm Carlist War British Auxillary Legion Lancers (above).  I modified the czapka to add the horsehair tuft, put them on Perry Napoleonic Brunswick Uhlan mounts, and replaced the lances with Northstar wire lances.

I decided to represent the 4th and 5th Uhlans (above left and right).  Information on Russian cavalry kit is spotty, to say the least.  Thus, I used a variety of sources, mainly relying on images in the NYPL Vikhuijzen Collection, Paintings by Pyotr Balashov, the Ray Lucas articles on the uniforms and armies of the Russo Turkish Wars in Miniature Wargames #20 and #21 (who says old magazines don't have value?), the (minimally useful) Osprey on the Russo Turkish War, and the good old stand-bye Mollo Uniforms of the Russian Imperial Army.  Putting these all together informed what I can only say is a collective interpretation of these units--which is probably as good as anyone's (certainly anyone who might care), but most of all, provides a look that fits in with the colorful take on of the rest of my 19thC armies. But enough of these justifications.  On to the toys (as usual, you may clix pix for BIG PIX in this post). 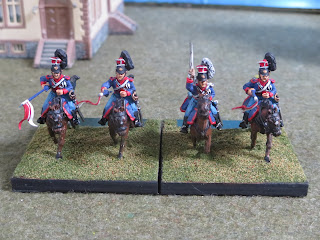 Although the source figures are in covered czapkas, I decided to represent these with uncovered czapkas sporting their colors--along with plumes.  There are various representations of the trousers, ranging from dark blue (like the tunics), to coveralls, to a gray "field" pant, to boot-like leather cuffs, to a standardized cavalry trouser of mid-blue with stripe (per some depictions and per Ray Lucas). I went with this last in order to set them off from the tunics and horse furniture and also because my dragoons will also be in these.  And just because I liked the color combination  (there, I said it!). 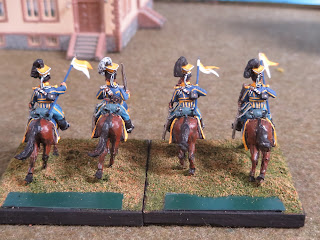 Normally, the details of hussar uniforms are held to be among the most striking as well as challenging (when it comes to painting).  After having done six units of post-napoleonic uhlans, I have to say that I have come to recognize that the details of the lancer uniforms (the piping, the lapels, the cords, the czapkas, the "flounders," the shoulder scales, etc) are the equal of any hussar unit that I've ever done--and when placed on the table, uhlans certainly hold their own in terms of fashion. 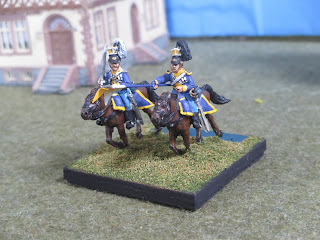 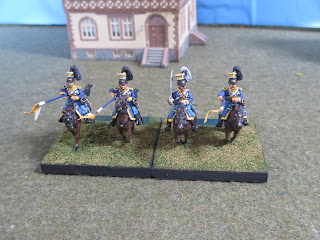 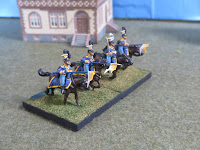 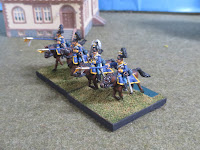 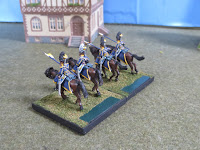 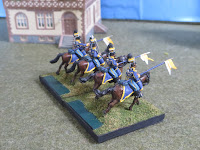 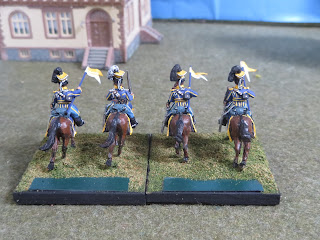 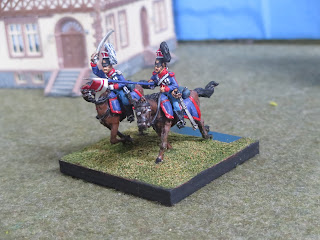 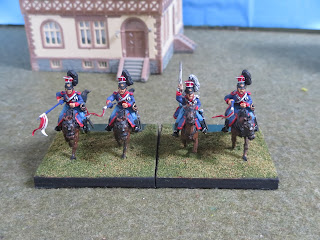 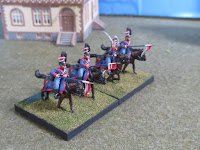 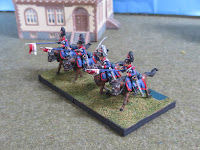 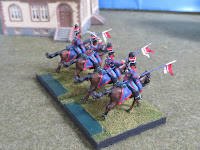 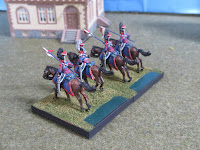 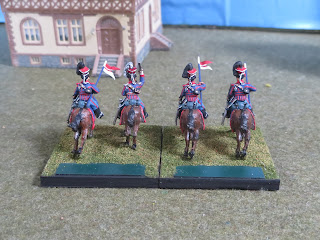 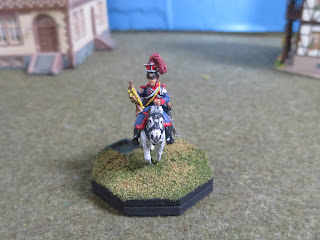 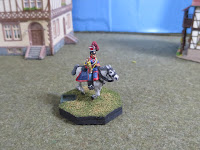 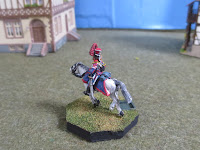 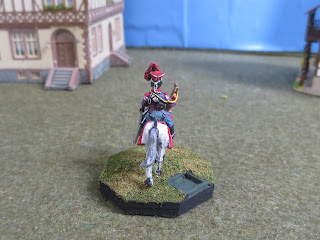 Just as with my Prussian Uhlans,  I set aside the Trumpter to use as a command figure. 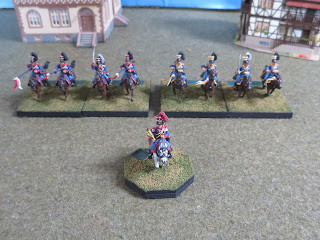 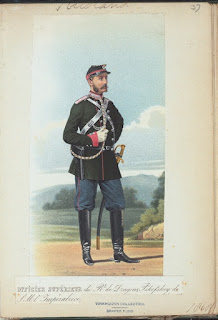