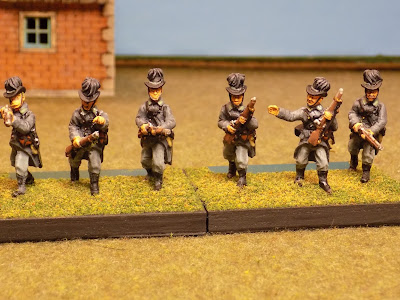 In the absence of the availability of further Hungarian/Honved figures, painting attention has turned to my budding Austrian contingent for the Chocolate Box Wars (and now Volley and Bayonet Battalion Scale) project(s).  To get me going after a lull in painting activity, I did two units (four stands) of Austrian Jagers. As usual, you may clix pix for BIG PIX...

These figures are a mix of poses from the superb Northstar 1866 line. I probably have a few too many of command figures in the mix when you look at them as two-stand units, but given that jagers will be able to operate as single stands in my system (and in VnB all stands operate singly), they shouldn't look too command heavy on the table. Besides, I really like the animation of the officers and NCOs. 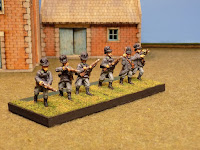 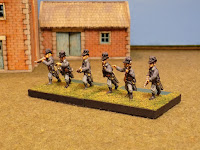 I admit that I'm mixing eras a bit in my choices in order to get more color.  For instance, I'm not going to be using the Northstar Austrian 1866 infantry given that they are in greatcoats. Instead, I'll be repurposing some other figures in order to have my Austrian infantry in white coats (to go with my Austrian Pre-1850 Grenadier Conversion in white coats).  Given that the jagers would be in gray regardless,  I went with these excellent figures.   The difference between this uniform and the earlier jager uniform is minimal, anyway (let it be our secret!).  Below are a some studies of the two different NCO stands. 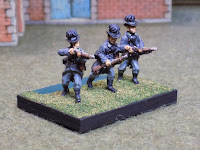 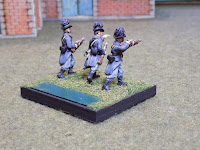 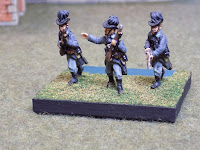 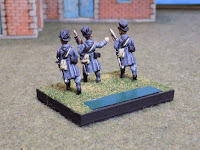 Sharp-eyed observers and/or those very familiar with these figures will notice that I snipped off most of the tin cups that were stuck on the sundry bags. I won't go into my complete rant on such things other than to say some "personality" with this kind of detail is fine, but making this sort of bric a brac part of the geometry of a an entire unit or army is just odd (as far as I'm concerned, anyway). If you look at my Danish infantry (Perry ACW Union Infantry figures), you'll note that I snipped off the tin cup that each of those figures came with, too! But enough of that. 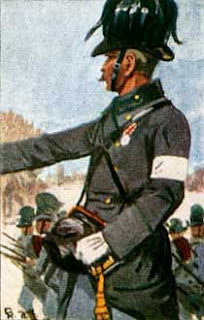 I ran across a brief reference in my Osprey on the Austrian Army that said that officers wore decorations on the greatcoat, as illustrated in the above natty image (from a German cigarette card).  So I thought I'd take a whack at adding this bit of detail to my officer.... 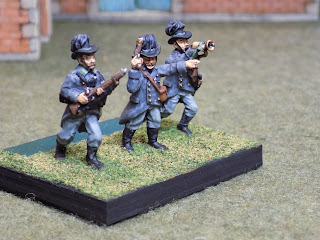 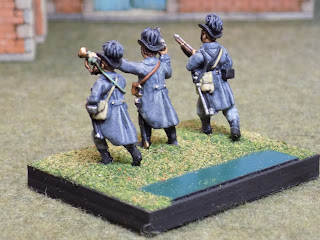 ...even though nobody will probably actually see it--and if you don't click on the picture to enlarge, you probably didn't see it either!  (I know I'm not alone in this kind of practice, and I know that I wont stop indulging in this sort of mania, but one does wonder sometimes...why do we do it?).   In the above, you will notice the aforementioned tin cup on the trumpeter's bag, which I left.  The lighting in the images doesn't bring it out very well, but the trousers are noticeably lighter than the coats, and I added an extra drybrush of Humbrol Mid Blue to give the trousers a bluish cast in order to represent the "pike gray" of the jager uniform (you can see it in the below). To keep the heads from looking like a big, black, blob, I drybrushed the black feathers with both dark gray and just a touch of light gray (they aren't quite so "white" as they appear in the pictures).  For the overcoats, I started with Model Master (Enamels) "Gunship Gray" (which is a really good shade of dark gray), then used a dark wash followed by drybrushing several lighter shades of gray on top of that.

In the end, units in gray uniforms with black strapping aren't going to leap off the table at you, but these fellows certainly do look businesslike, as they should. 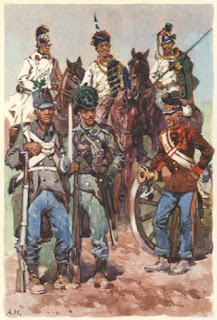 After posting the above, and leaving a note on TMP about the project, there was a discussion concerning the color of the plumes (black vs green). I won't reprise it here, but if you're curious, you can follow the link to the TMP posting to check it out. The bottom line is that I had seen green plumes in many illustrations, to include those I included in my original post, and decided that I would redo the plumes in green to add a dash more color to the unit (and it just looked good to my eye). So, here is a brief study of the results: 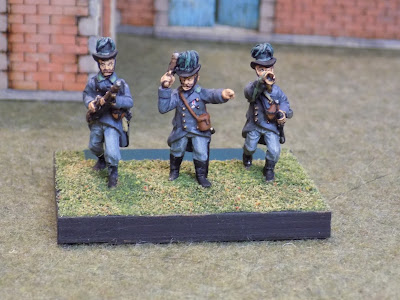 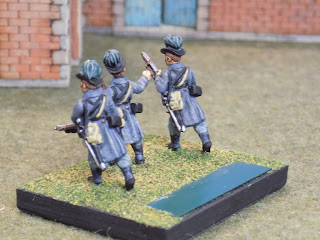 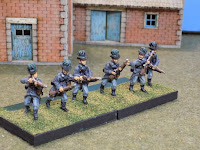 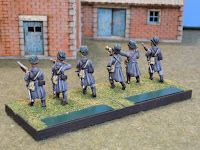 Still very business-like, and now with a touch more color.