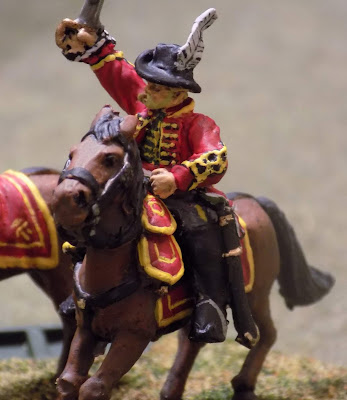 Close up of the conversion inspired by Hungarian Gen Artur Georgei

In this post, dear readers, we "deliver the goods" on recent work-in-progress posts on 28mm mounted Hungarian/Honved commanders for the Hungarian Uprising, 1848-49.  For those just joining us, none of the figures in this post began life as you see them here. For more discussion on figure selection and modification, please follow the links in the commentary.  As usual, you may clix pix for BIG PIX in this post.

First up is the army command stand, which has a general based on Hungarian Lt Gen Artur Georgei (shown above left) and a Grenz Staff officer (above right)--images are from the indispensable Gyozo Somogyi, Honved Army 1848-49. The figures are a Perry ACW Confederate General and Dutch Belgian Napoleonic commander, respectively. 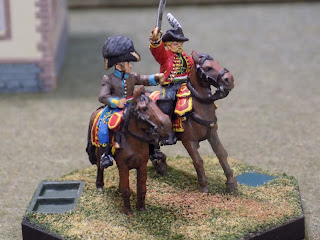 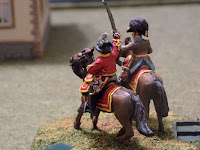 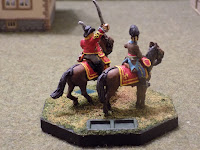 The confederate general sculpt has a nice row of prominent buttons on each lapel--I brought those out in yellow and painted a corresponding yellow braid line to each--all underpainted in black to bring out the structure. I also echoed the pattern on the vest, only with a central yellow seam.  I think the end result delivered a good impression of the jacket as depicted in the source.  Given that I already had Grenz units in pink and yellow facings, I picked sky blue distinctions for the staff officer--always liked the blue/brown combination.  To keep the large feather plume on his headgear from looking like a big, black, lump, I dry brushed it with dark grey and then highlighted it with a touch of light gray (which is an off white, basically). 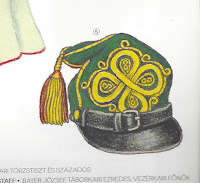 Next up is the Hungarian General Staff Officer in slant cap, inspired by the above images (again from Somogyi). This conversion was made with a head swap: from a Steve Barber Honved dismounted officer onto a Foundry Maximilian Adventure Austrian Red Hussar torso. 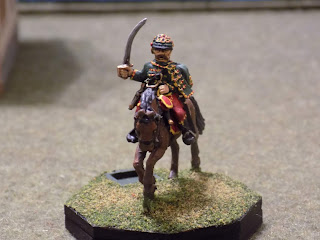 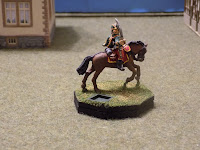 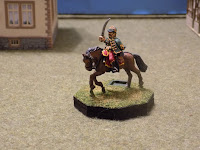 I decided on the more embellished yellow and red braiding shown in another illustration of Honved general staff officers. There was a fair amount of trial and error to get this braiding to look "red and yellow" as opposed to like a series of disembodied yellow spots interrupted by red and green (in places).  I finally used an impressionistic approach, sizing and spacing the red points so they look regular to the eye as opposed to always trying to spot them geometrically ("realistically?") on the features themselves, if that makes sense.  I went with the red trousers as opposed to the gray based on a period painting showing Hungarian staff officers in this snappy combination. Originally, I was going to use this fellow as a "secondary" figure on the army command stand.  Instead, I paired the two Perry figures on the army command given how well they went together and let this fellow stand on his own.


GENERAL PURPOSE COMMAND STAND
When I started this project, I had originally intended to use a Spanish colonel from the Perry Carlist War line for the grenz staff officer.  However, I wound up switching from that figure to the Perry Dutch Belgian Napoleonic command figure. This left me with a spare, partially done command figure that I wasn't thinking much about.  Then I saw Iain's comment on the work in progress post expressing an interest in seeing what I would make of this figure. This brought about a heel-of-the-hand to head moment: Duh! Of course! Why not finish him?  So here, dear reader, we witness the answer to Iain's question-turned inspiration.  I have created a "generic" officer (no sash!) suitable for use with just about any mid century army... 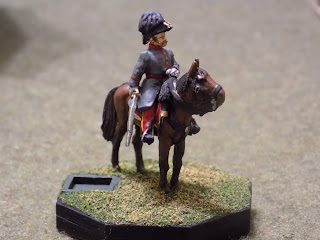 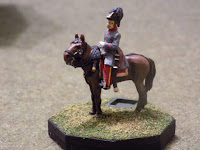 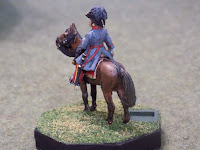 ...in other words, he is the very image of a Chocolate Box major general (apologies to Msrs Gilbert and Sullivan).  Were it not for my WIP post and Iain's comment therein, he would have disappeared into my spares box(es) until stumbled across again (it has happened before). Thus, he is also the very image of the benefits of blogging. 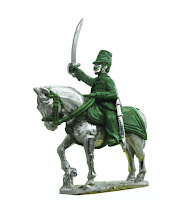 Steve Barber Mounted Hungarian Officer: not yet in production

Although an actual mounted Hungarian command figure that I commissioned will eventually be available (above), I decided to take matters into my own hands and do a set  via conversion (birds in the bush vs birds in the hand and all of that).  And It's not like I won't also be getting the above figure once it comes out (try and stop me!).  Given how many conversion figures there are among my Hungarians, anyway, it seemed only appropriate that their high command should also be conversions: one-of-a kinds leading one-of-a kinds.