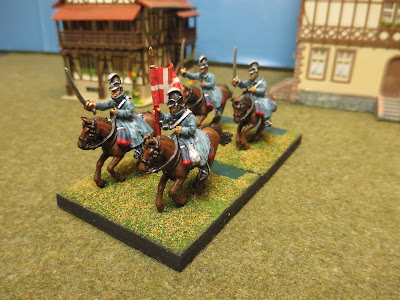 Travel, the recent Thanksgiving holiday, and life in general may have slowed blogging, but there has been hobby progress.  In this post, dear readers, I follow up on my To Arms, To Arms! post of Oct 29--with the first unit among those being prepped there to be completed (others should be completed--fingers crossed--prior to the Yule).  In this post, as usual, you may clix pix for BIG PIX... 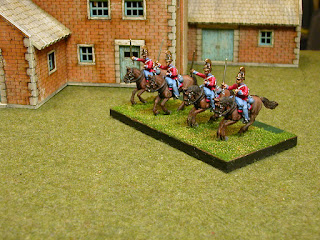 Austrian 1866 Dragoons Converted to Represent Red Coated Danish Dragoons
.
The Danes were my first foray into post-Napoleonic forces. At that time, Northstar did not offer any Danish cavalry.  Thus, I converted Northstar 1866 Austrian Dragoons to represent Danish Dragoons (in the earlier red-coated Danish dragoon kit).  Although pre-blog, there is a post on TMP outlining this project.  Fast forward to the completion of my other major contingents (Prussians, Austrians, Hungarians...) and I realized that my Danes could use some updating, specifically in the cavalry department, which consisted of three regiments: the aforementioned single regiment of dragoons, the Danish Guard Hussar, and the Danish Horse Guard .  The prompt to take action came when I saw that Northstar had updated their 1864 line to include Danish Dragoons.  Here is my study of these figs: 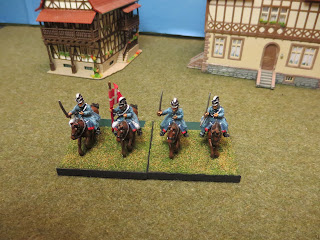 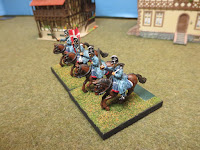 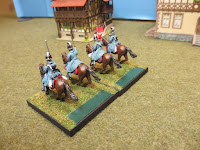 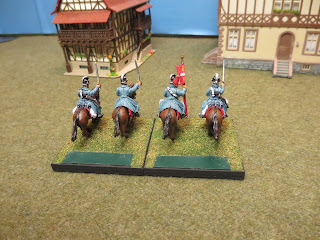 The sculpts are in the less colorful later uniform and wearing the greatcoat typical of the 1864 campaign.  I do think that the helmet with the steel fittings is a rather smart feature of the later uniform. 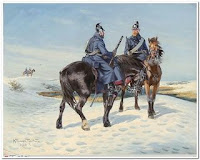 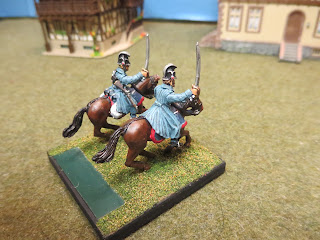 Although depictions of this uniform vary, they generally show a steel/grayish light blue uniform with no color differentiation between the uniform, greatcoat, and saddle furniture (very unique in that way). To reflect the color, I used Humbrol 157 Matte Azure Blue, a diluted wash of black, and then a fairly "heavy" highlight of Humbrol 89 Matte Mid Blue. I took some license with he saddle furniture and used a slightly darker shade of blue to create some separation between the rider and furniture.  When I tried a historically correct rendition with them in the same color, it left the figures looking unfinished.  So this became one of those touches that I  deliberately got "wrong" in order for the figures to look "right." 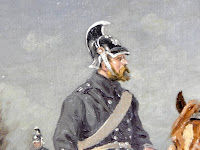 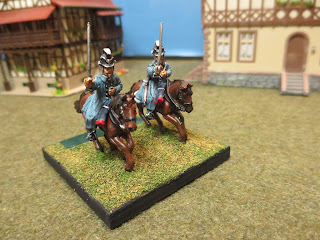 As usual, the Northstar Sculpts have details that take closer examination (and sharp eyes) to appreciate--like the van dyke facial hair on the command figure (left). Although under gaming circumstances, nobody will probably ever see this, I know it's there and that's what matters, I suppose. 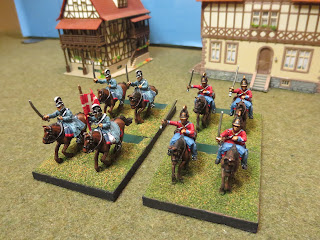 The Danes can now can field a proper Dragoon Brigade... 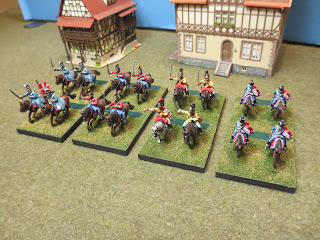 ...as part of a proper Danish Cavalry division.