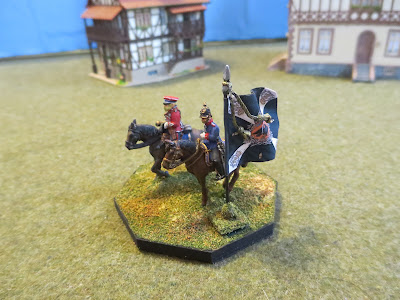 In this post, dear readers, we report on a modest project, the reworking of a command stand.  This is in keeping with the last few projects, which were "upgrades" (for lack of a better term) to replace and/or enhance the collection by incorporating newer figures.  In this case, the temptation of a newly released Prussian High Command set with a mounted officer in the Northstar 1866 Line was too much to resist. 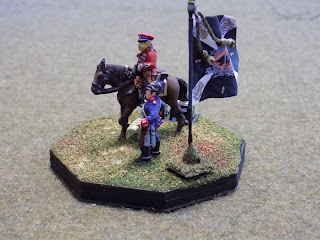 The original high command stand: both figures are conversions.

When I was doing my Prussian contingent, I had a smattering of out of production Helion Prussian mounted officers which I needed to use for my lower level command stands (each being a single mounted figure).  This left me with the high command stand to do, for which I decided (above) to convert Great War Miniatures 1914 figures to represent Prinz Friedrich Karl and an Adjutant of the General Staff.  For the curious, this project is more fully addressed in an earlier post. Given that all of my other high command stands have two mounted figures, I decided that I "needed" to upgrade the Prussian stand with a mounted officer from this new set (the fellow in the middle below).

One interesting sidenote--the Northstar Prussian High Command set has a Prinz Friedrich Karl figure (above left),   but I prefer my Friedrich Karl conversion--so I'm not "upgrading" that one!  As usual, you may clix pix for BIG PIX in this study. 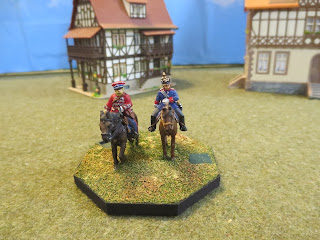 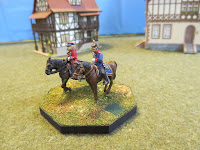 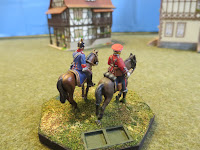 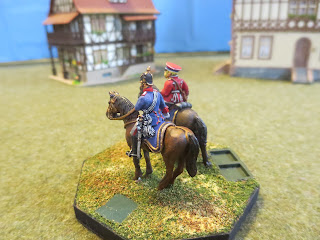 For me, the points of emphasis on command figures of this era are often the sashes and sword knots. The small metal square to the left is a feature of all of my high command stands.  This allows for the addition of a flag (which has a magnet in its base)--just a bit of optional extra eye candy (or in case we have a game where the presence or absence of the flag might signify in some way).