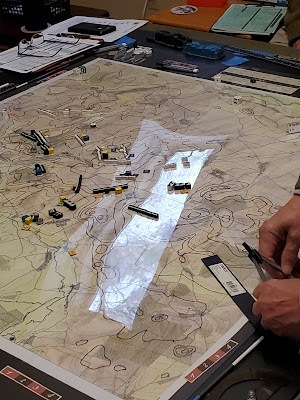 In-progress scene of another installment of Half Scale Bloody Big Battles (BBB) played with Kriegspiel Blocks on a (1/2 scale) Kriegspiel Map (Koniggratz).
Greetings! In this post, dear reader, I will convey the tale of a recent speculative engagement between the Russian forces of Czar Nicholas II and the Austrian Forces of Emperor Franz Joseph I, circa 1879, in the wake of the Russo-Turkish War. But more on this context anon.  First, a few notes on the setup of the game.  As usual, in this blog post you may clix pix for BIG PIX. 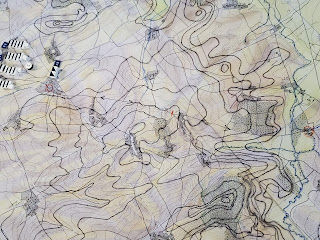 As with my previous outing, I returned to the Koniggratz Kriegspiel Map. As is my usual, I covered it with plexiglas and outlined selected contour lines and other terrain features to help players see the landscape. For more on this entire system, I would encourage the curious to visit my BBB Resources Page. 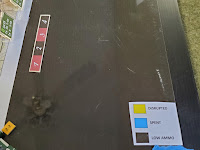 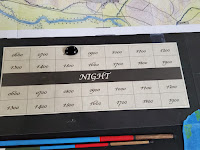 Aside from flattening the mapsheets and providing a means for highlighting features, putting plexiglas over the playing area provides other benefits. In this case, (above left) I slipped status marker information and inch scales under the plexi, and also (above right), I put the turn record under it.  Speaking of which... 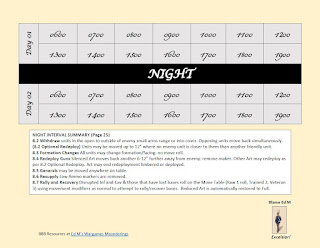 ...post game, I improved the turn record track (new version pictured above).  This game was intended as a hybrid mini-campaign and battle, starting at 0800 on Day 01 and going through 1900 on Day 02, with a BBB night interval between. I came up with this turn record chart to support a game of this sort; it has two days broken into 1-hour turns plus a summary of the BBB night interval rules. You can  download a pdf of it here [Click] and also find it on the above mentioned BBB Resource Page.  Enough of the framework; on to the game. 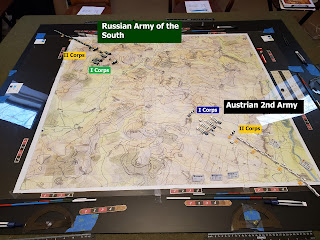 There were a variety of scenarios that could have led the Russo Turkish War (1877-78) expanding into a clash between Russia and other major European powers, in particular Austria. In reality, Austria felt threatened enough by the incursion of Russian interests in the Balkans to invade Bosnia and Herzegovena in 1878. This scenario is a speculative clash between Austria and Russia.  Although it uses the Koniggratz Kriegspiel Map, it does so as a generic piece of terrain. The map is large enough to provide for a hybrid game, combining the elements of a campaign with a conventional battle game (or that was the idea...). 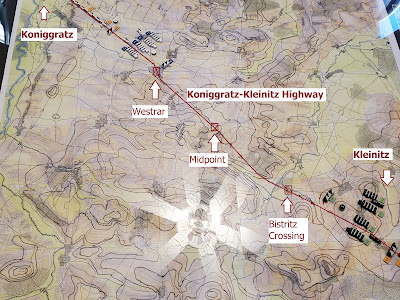 The key terrain in the region is the Koniggratz-Kleinitz Highway (in red above). This is the only road that provides the BBB double move (provided the formation using it is in road column, per my variant: see the BBB Resources page for more). It also represents a main supply line (MSR) and axis of advance in the region; and so  in this scenario, opposing forces are marching along it from opposite directions and stumble into each other. The complete scenario can be reviewed here [Click] and is also posted on the BBB Resource page.

The victory conditions were designed along the principles of warfare and closely mimics the principles of territorial control reflected in GO  (the Chinese version of Chess).  Other salient principles of war at work are security, objective, maneuver, and economy of force. In short, this is a meeting engagement/movement to contact, with each side is trying to gain advantage by penetrating as far as possible into the enemy territory along the key axis, controlling as much of the field as possible, and safeguarding their own base. In so doing, of course, they will run into the opposing force, who is trying to do the same thing. Engaging, pushing back, and destroying the enemy is part of the operation, but so, too is preserving the strength of the friendly force: how hard to you push vs where and when do you maneuver? Where is it worth risking an engagement? The fact that this is a two day scenario gives more options for developing the situation. 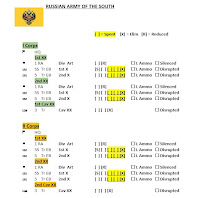 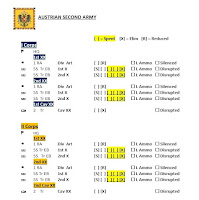 For the Russian order of battle (above left), I referred to the excellent War in the East (Quintin Barry) and then sampled the Russo Turkish War Russian OOBs in the BBB European Battles scenario book to get a handle on translating units to game terms. The Russian structure was pretty standard: a corps consisting of two infantry divisions, each of two brigades of two infantry regiments (3 battalions each), plus a corps cavalry division. Often at the "Army" level there was an independent rifle brigade of several battalions. Finding information on Austrian operational structure, post 1866, pre 1914, however, was much more challenging. Happily, I ran across a web page on the Way Back Machine (which unfortunately I cannot conjure up again) that provided a complete OOB for the Austrian forces in Bosnia and Herzegovina in 1881.  The Austrian divisional structure mirrored the Russian: two brigades of two infantry regiments, each of 3 battalions.  The major difference between the two being that each Austrian brigade had its own jager battalion.  To make an (already) long story short, I decided that I would use the brigade as the base element (with two per division), each of 5 Stands. [Aside: I don't do a mathematical translation of numbers of men or guns to a stand; as long as values for the sides are relative to one another, then it really doesn't matter; I work them up based on how they play from there]. There would be two divisions per corps, each with a divisional artillery battery, and two corps per side, plus a corps cavalry division.  I assumed a four battalion Rifle Brigade for the Russians and represented it by assigning an "S" to four of the Russian brigades (the first of each division). The Austrian brigades each had an inherent "S" for the assigned jagers. To make up for this, I made the Russian cavalry divisions 3 Stands as opposed to 2. All are Trained (Tr) and all infantry are armed with Early Breech Loaders (EB). I probably should have made them all Tactically inept, but thought that this would have had too drastic an impact on game play: I wanted units to have a bit more survivability given the relatively low unit count. 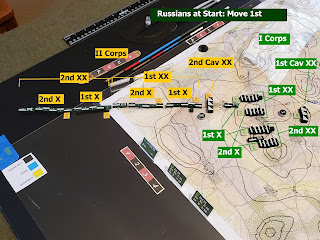 The Russian starting position, entering from the Northwest corner of the board with the lead corps (I) deployed and the follow on corps (II) on the road. 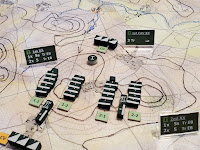 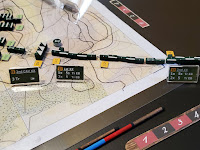 A closeup view of the formations. (Above left) the Russian I Corps, with the 1st division on the left and the 2nd on the right. The Corps cavalry division is out ahead. I produced the standing labels with unit information, one per division, as well as the counters, which are color coded by corps (light green, I Corps, Yellow, II Corps) with the division and brigade numbers on them (1-1 would be the first division, first brigade, 1-2 would first division, second brigade, etc).  Each corps also had a HQ (the circular marker). 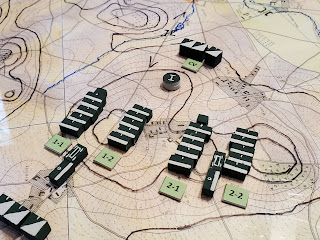 Given that all units were the same, it turned out that the labels were extraneous and the players set them aside and only used the markers plus their rosters.  This made for a much cleaner table, too. Above, the Russian I Corps, with 1st Division on the left and 2nd on the right. Given that all guns were RA, there was no need to mark them as such. 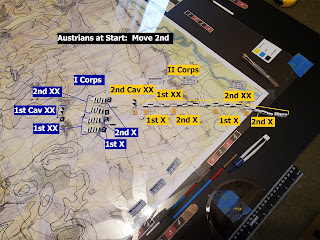 The Austrian starting position, much like the Russian, only coming in from the opposite corner (the Southeast). 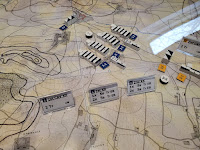 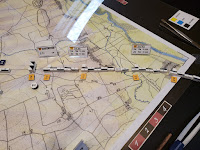 Closeup of the Austrian commands, I Corps leading (above left) with II Corps coming up the road (above right). 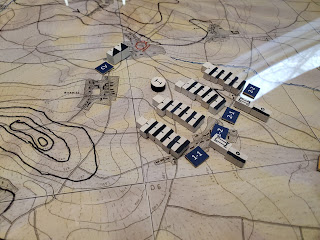 Equal time: Austrian I Corps in the lead, with counters only. 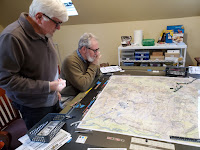 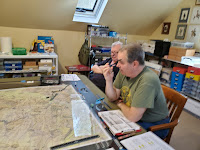 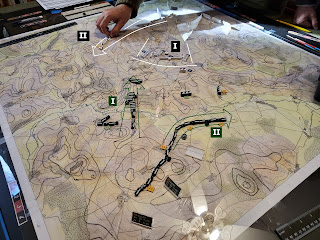 Opening moves. The Russians moved first, sending I Corps up the main highway, causing something of a traffic jam: General Dice was not with AJ in this game, starting out with several bad movement rolls that hampered his momentum. Meanwhile, George leads the Russian II Corps on a wide flanking march to the south.  On the Austrian side, Mike brings I Corps forward and begins to deploy... 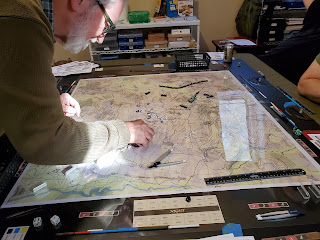 ...while Byron begins to march the follow on Austrian II Corps to the North. 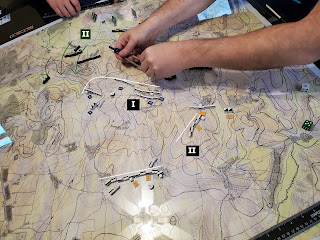 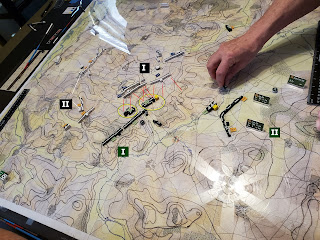 ...everyone gets stuck in.  The lead brigades of the Russian I Corps get hammered as they find themselves trying to deploy in the face of a division of the Austrian I Corps backed by artillery at the top of the ridge (yellow cubes are disorders, blue are spent, black are low ammo).  General Dice was also with Mike and the Austrian I Corps here; he almost never missed! (and AJ, on the other hand, was continuing his run of crummy dice, which didn't help the plight of the Russian I Corps). The Austrian II Corps is starting to move up into the line to put more pressure on the Russian left flank. So far, the two Russian Corps have been isolated from each other, with the I Corps bearing the brunt of the action... 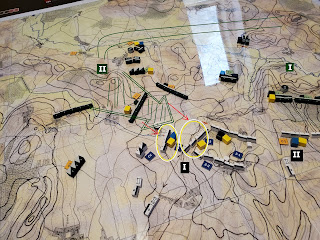 ...but George has finally brought the Russian II Corps around. In a spectacular turn of events, the 1st Brigade of the Russian 1st Division catches the left most Austrian brigade in the flank, assaults it, and gets a +7 result (the maximum, for anyone not familiar with BBB), sending the Austrian brigade back spent and allowing the Russian brigade to following with an exploitation assault into the next Austrian brigade, which it also bowls back (although not as decisively)! Suddenly, the Austrian I Corps is in peril, as is the security of the Highway... 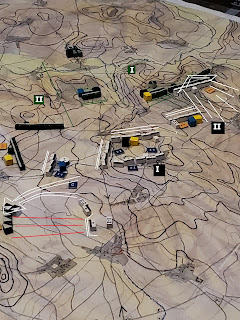 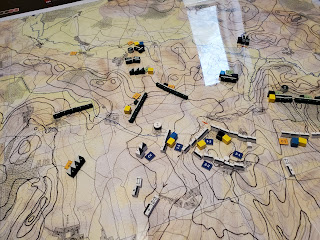 A snapshot of the markers on a section of the field shows that the day's fighting was taking its toll on many of the formations and that momentum was being expended (blue markers are spent divisions, yellow are disrupted, and black are low on ammo). As we completed the 1800 turn of Day 01, time had run out and we called it a game, with the result being inconclusive. It would have been interesting, indeed, to have been able to proceed to the night interval, recover stands, reposition of units, and then see what Day 02 would have brought! 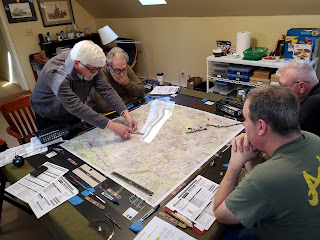 Despite the fact that we did not proceed to a second day, we all thought that the hybrid map/mini campaign game worked out well. It still provided a depth of maneuver not found in most mini games, and the decisions involved with marching and maneuvering formations across the battlefield were as much a part of the game as the conventional components of rolling dice and picking off stands, which was not lacking.  However, the results of the latter had more context given the larger picture involved.  I had imagined that the first day would have involved more maneuver than combat, and so might have gone faster, but that's just not how this particular game developed. Nobody saw that as a knock on the concept, though. 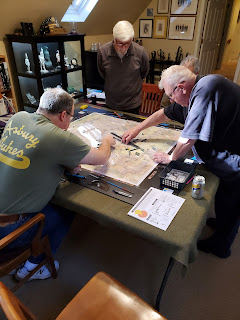 Regardless, it  was a grand day of gaming, in particular since it was another day time affair among we happy pensioners (except for AJ, who had the day off).  We played, lunched, played, and then talked about playing again!